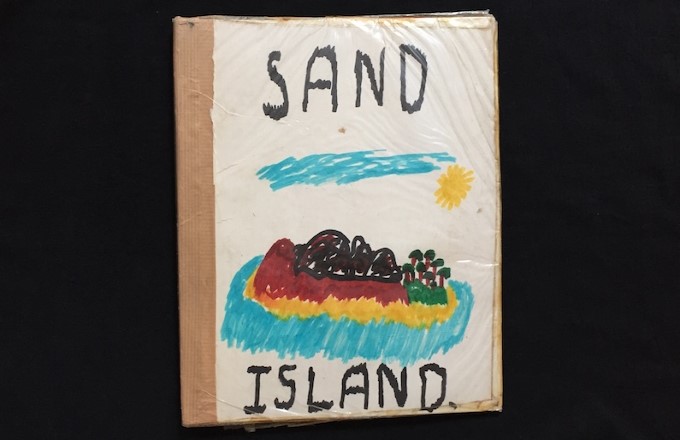 12+   My first "published" writing was an Enid Blyton, Famous Five-style adventure story, Sand Island, in 1972. I wrote the story and illustrated it with textas. My aunt, the only one in our family who owned a typewriter, typed up the manuscript. And my father helped bind and cover the book. I was ten.

My treasured first (and only) edition still exists. When I re-read the book recently, it reminded me of the five elements of a good story: characters, plot, setting, tension and resolution.

I read a lot of Enid Blyton's Secret Seven and Famous Five stories when I was young. And the opening lines to Sand Island are Blytonesque:

"Mm," said Jack, "that tasted good."
"I know," grinned John.
"Why are you grinning, John?" asked Jane curiously.
"My mother made the cake."
"Our mother," said little Wendy. 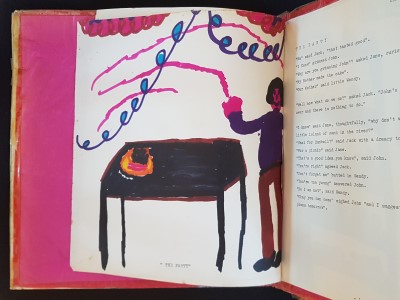 Okay, Blytonesque and a little embarrassing — but I was only ten! And now, having established the characters and some of the relationships in the story, it was time for me to set up the adventure:

"Well, now what do we do?" asked Jack. "John's birthday party is over and there is nothing to do."

Remember, this was a time before computer games and smart gadgets. When TVs were black and white and offered limited program options for children.

"I know," said Jane thoughtfully, "Why don't we go to that little island of sand in the river?"
"What for dumbbell?" said Jack in a dreary voice.
"For a picnic," said Jane.
"That's a good idea, you know," said John.
"You're right," agreed Jack.

Yes, there is more than a hint of the sibling rivalry and hero-worship from the Famous Five in my story. Jane might sound like Anne, Jack could be Dick, and John may remind Blyton readers of the Five's leader, Julian. But it wasn't total plagiarism: there was no cousin George character, or Timmy, the dog (Woof!). Though ...

"Don't forget me," butted in Wendy.
"You're too young," answered John.
"No I am not," said Wendy.
"Okay, you can come," sighed John, "and I suggest that we make our plans tomorrow."

The children meet at Jack and Jane's house the next day to plan their adventure. Jack points to a map of the island and suggests, "We take this part of the sand, as it has some greenness." Fortuitously, Jack's dad owns a rowing boat. It seems irresponsible today, but Jack and Jane's parents, and John and Wendy's, permit the children to row to the island for a picnic and games.

While rowing to Sand Island, Wendy proposes the four sing a song: 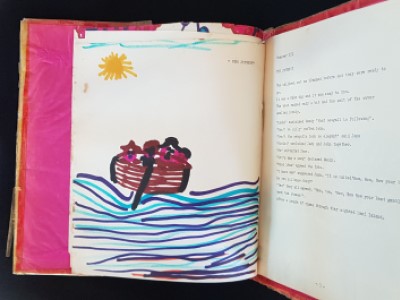 Thankfully for the reader, it only takes a couple of renditions for the children to reach their destination.

John and Jack pull up the boat onto the "white sand of the beach" on Sand Island (I'd coloured it yellow in my illustrations). The children spot the place they had picked for their picnic and race each other to it.

"Last one there is a rotten egg," shouted Jack.
Since John was the eldest (being eleven), he won. Followed by Jack, Jane and, last of all, Wendy.

The four children enjoy their picnic and exploring the island. However, "soon the day became a little bit dark". John organises a last race around the island. He ties for first place with Jack. But both boys easily beat the younger girls and start packing the boat while waiting for Jane and Wendy. 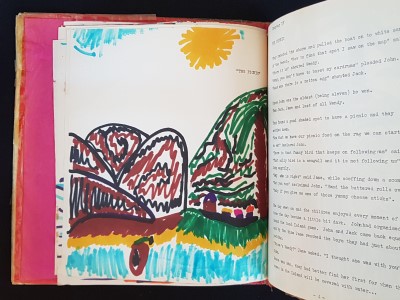 When Jane finally joins the boys, she asks, "Where's Wendy?" Big brother John retorts, "I thought Wendy was with you."

Where was she? They had better find her soon. For when the tide rises, Sand Island will be covered with water ...

The children split up and search three points of the island. When they regroup, John remarks out they haven't looked in the east end of Sand Island.

John, Jack and Jane head to the east end of the island and, nearing it, hear screams.

They were coming from the direction of a big amount of quicksand.
The children ran to where the noise was, and can you guess what they found?
It was Wendy.

John and Jack grab a vine, throw it to Wendy, and the boys pull her from the quicksand. Everyone is relieved, and Jane and Wendy stop crying. (Sorry, a George character would have been braver.) But on their way back to the boat on the beach ...

Suddenly they heard a rumble and then water. John said the tide was coming in. And that in less than two minutes, Sand Island would be underwater.
"I suggest we climb a palm tree," said Jack.
"Good idea, Jack," John agreed. "The water won't go over the top of the palm trees."
So the children ran to the nearest palm tree.

Led by John, the children climb the tree as the incoming tide rushes towards them. Soon, all they can see of the flooded Sand Island is "the tops of the palm trees".

Each child had some fear in their heart, for they knew if the water rose anymore, they would drown. 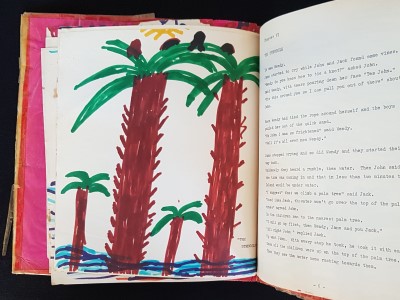 Somehow John, Jack, Jane and Wendy sleep through the night. In the morning, John wakes first to find the island "glittered brightly in the sunlight". The four children climb down from the palm tree and return to the beach. However, the boat is missing.

"The children scanned the beach for the boat but could not find it. So they gave up, knowing they were doomed."

At this point, the story begins to sound more like a scene from Lord of the Flies (though I didn't read William Golding's classic until my mid-twenties):

"Oh, it's all your fault, Jane," said Jack nastily. "You and your stupid idea to come to Sand Island."
"No, I should take the blame, Jack, not Jane," said John. "If I hadn't organised that last run around the island we would be home by now."
"I agree, John," said the very agreeable Wendy.
"You would, wouldn't you, Wendy?" cried Jane.
"I know your boyfriend, Jane," said Wendy.
"Oh, shut up all of you," shouted John, trying hard to keep away the tears, too.

But then the children hear voices calling out their names. "It's Daddy," Jane screams excitedly. The children's (negligent!) parents have come to the rescue. And John, Jack, Jane and Wendy are soon safely in a speed boat, heading away from Sand Island. 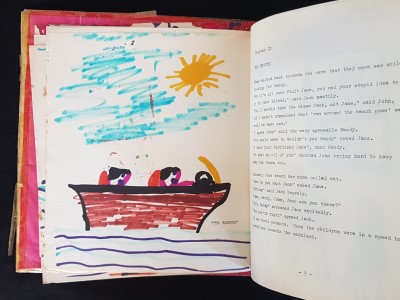 "Boy, what a story to tell the kids at school," said Jack eagerly.
"Yeah, it would be kind of exciting, wouldn't it?" agreed John.
"I wasn't frightened one bit," remarked Wendy boldly.
"Ha, ha, ha," lauged Jane, John and Jack.
"What's the big joke?" asked Wendy.
"What, ha, you just said, ha, ha, about never being scare, ha, ha," laughed Jack.
"Yeah, remember the time you fell in the quicksand, ha, ha," agreed John.
"He-he and the time you thought we were doomed, he-he," giggled Jane.
By the time they stopped laughing and giggling, the children were home and ready to tell everyone about their adventure.

My earliest school memories are of learning to read and write. And then of writing stories. As a Grade Three eight-year-old, I wrote a series about a private investigator, Sammy Snail, a mollusc who always solved his cases, albeit slowly. (Sadly, I don't have copies of these stories.)

Next year marks the fiftieth anniversary of my first "published" writing. It was inspired by Enid Blyton and my ten-year-old imagination (which back then wasn't distracted by computers, smart gadgets and all-day TV).

Reading Sand Island with my middle-aged writer's eyes, I'm pleased to see the young me understood the five elements of a good story: characters, plot, setting, tension and resolution.

Even if the middle-aged me now often leaves the resolution hanging in my stories.

N.B. Here's another blog post on the first book I remember reading, My First Book (September 2017) - and no, it wasn't an Enid Blyton.