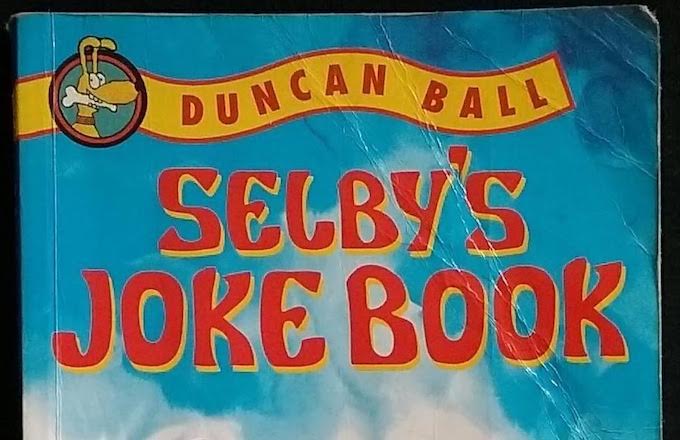 The Selby book is from my teenage son's bookshelf. I must have read it to him at bedtime many years ago. Or perhaps it was one of his early independent readers? Sadly, nowadays, my sixteen-year-old is glued to YouTube and won't read a book for himself ­— nor does he want dad to read to him!

When I opened the book cover, I saw inscriptions that told me it had belonged to a young girl, Grace, before my son. That's not surprising. I bought many books second-hand and similarly have "gifted on" his less cherished children's books.

Judging by the handwriting in pencil, phonetic spelling, and her knock-knock joke, Grace was very young when she owned and wrote in the book.

And then I recognised her surname: Grace was the daughter of the director of the childcare centre my son attended for four years before he started primary school, over a decade ago.

Grace is now a young woman, making her mark in New York. Her writing in Selby's Joke Book reminds middle-aged parents like me how swiftly the childhood years fly past. And of the importance of books in the lives of young children ­—  oh, how I wish books still held that special place in my teenager's life!

The inside cover of Selby also underscores how inscriptions can be time-and-place stories in their own right, like an Ernest Hemingway six-word story. I took a photo of Grace's knock-knock joke and shared it with her and her mum. Both responded they'd laughed, and Grace's mum confessed she'd cried! 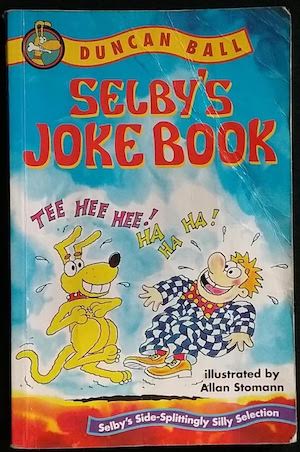 Inspired by Grace, I browsed my bookshelf, where many of my dusty old books, like Selby's Joke Book, are second-hand. In the spirit of Hemingway, I've selected six inscriptions, with book titles and authors, to share in this blog post.

All are more than six words in length. But as with the six-word genre, if your book-reader/writer's imagination works like mine, then you can construct a story around the inscriptions:

Animal Farm by George Orwell
Jacqueline Whiteley, 4 III, sends love to all who want it.

Watership Down by Richard Adams
Auntie Joan, With lots of love & best wishes for a speedy recovery. October 1976

David Copperfield by Charles Dickens
Awarded to Fanny [Papper] for an Essay on 'What I saw during [the holidays]'. Sept 1911

Seven Pillars of Wisdom by T. E. Lawrence
To Dr. Mackezie, A small token but showing a great appreciation, From all at Wales Coast. April 1937

The Prophet by Kahill Gibran
My Dearest Brother Nick, Hoping you get as much pleasure from this book as I have, Carolyn. Christmas 1969

The Rise and Fall of the Third Chimpanzee by Jared Diamond
Dear Josh, this book looks really interesting and I just thought it would be cool and useful for someone whose life has been committed to the attainment of useless information. Happy 26th birthday, Love Dave

I also have written inside books I've given to friends and family. My favourite (predictably) is one I wrote in 50 Great Bedtime Stories, edited by Fiona Waters (Miles Kelly 2001), which I gave to my son on his birth:

Dear Jaiden, My first present to you does not have bells and whistles, nor coloured flashing lights. But it is designed to capture your attention and fire your imagination. It is a book, and I promise to read it to you every night, Love Robert (your daddy). 2/6/2002

Snapshots in Time and Place

As I admitted in an earlier blog post, Bedtime Stories (June 2018), like all new dads, I underestimated the challenge of a newborn child and overestimated my ability to cope. And I didn't keep my promise.

But then, inscriptions aren't meant to state lofty goals — they're a snapshot in time and place and a record of the emotions felt by the writer.

And even if we don't know the individuals involved, we can construct a story behind the words and names on a page with a little imagination, whether the inscription is wishing someone all the best or telling a *knock-konck* joke.

Or a dad who's sharing and hoping to inspire in his son the love of reading books.