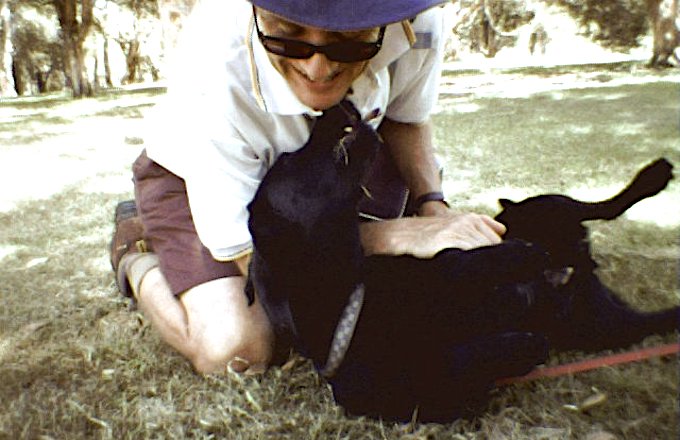 12+   I met Harry when he was six months old. He was the last of his litter, hiding under a kitchen table. When the breeder dragged him out, Harry flopped his head on my leg and looked up at me with worried, brown eyes.

At that moment, a bond formed between us, and a favourite resting position, with Harry’s head on my leg or lap. It was a bond that lasted for just over twelve years until he passed away, with his head lying on my lap.

I learned so much about dogs and dog training from Harry. We were associated with my local dog training club for all our years together. I stumbled on and joined the dog club on our first-morning walk in Centennial Park, and by the time I lost Harry, I had become an instructor at the club, and he was my "demo dog".

Harry was also the star of a childcare centre and school holidays activity I ran called, "Can I Pat That Dog?". The talk was divided into three parts:

The tricks always proved the most popular part. And afterwards, kids would crowd around us and, showing they had listened to the talk, ask, "Can I pat Harry?"

In addition to being a star demo-dog, Harry was the muse for articles I wrote on dogs, published in my dog club’s newsletter and by a now-defunct community newspaper, where I shared my insight into dogs, dog training and dog owners. Many of these articles are now shared on Tall And True.

Harry's principal role, however, was as the family dog. When he died, I wrote Harry had brought so much joy into my life — it seemed wrong to feel sad about him. But as other dog lovers know, that’s not the way grief works. And at moments like these, I like to recall my favourite dog quote by Agnes Sligh Turnbull:

“Dogs’ lives are too short. Their only fault, really.”

I felt grief-stricken when Harry died. While I maintained my connection with the dog club, getting my "dog-fix" by running training classes, it was another two and a half years before I was ready to take on the responsibility of another dog.

By an odd coincidence, as I wrote in another article shared on TallAndTrue, A Forever Home, Jet was two and a half years old when I adopted him — he was born just before Harry passed away.

When Harry first flopped his head on my lap, I had no idea of the journey we would take together. Nor that he would inspire me to write about dogs. Harry was a great muse. But more than that, he was a good dog.

Have you had a similar good dog muse in your life?