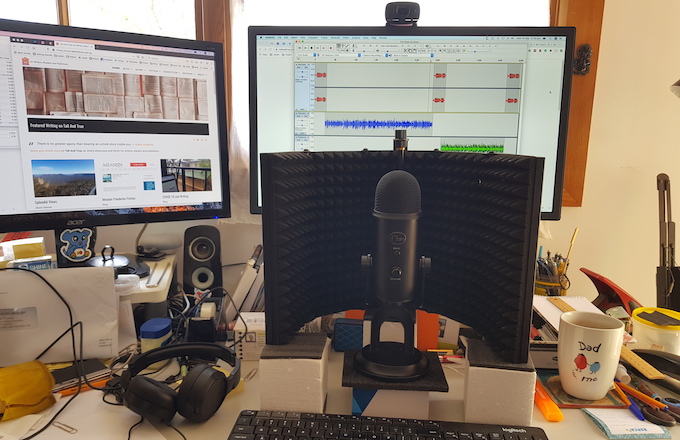 12+   Tall And True Short Reads is an audio fiction podcast featuring original short stories from TallAndTrue.com, written and narrated by me, Robert Fairhead. I launched the series with a trailer on 5 September 2020. And I published the first episode, Five Meet On Zoom, on the podcast feed five days later.

As I comment in the trailer, I've always loved reading and writing and wrote and self-published my first book, Sand Island, an Enid Blyton-Famous Five-style adventure story, in 1972, when I was ten. (I still have that treasured first and only edition.)

I'm now a middle-aged writer and editor here at Tall And True, where I've shared many fiction and nonfiction pieces. In addition, my book reviews and other writing have appeared in various print and online publications. And in 2020, I published a collection of short stories titled, Both Sides of the Story (available on Amazon).

I'm also an avid fan of podcasts and listen to them whenever I'm out and about or at home doing chores. For me, podcasts are entertaining and educational, and my playlists include news, politics, science, philosophy, history, music, comedy, and, of course, books and writing.

And I like reading stories aloud. As I wrote in the Bedtime Stories blog post, one of the joys of being a dad for me was the golden age of reading books to and, later, with my son at night. I loved taking on the voices and personalities of characters, especially when we moved on from early-readers and tackled J. K. Rowling's Harry Potter series.

When my son became an independent reader, dad-the-"voice actor" was made redundant. And then my son transformed into a teenager and, sadly, stopped reading books for enjoyment. However, my now eighteen-year-old recently discovered the relaxing benefits of Audible audiobooks after a hard day's study. And what was his first Audible book? Yes, Stephen Fry narrating Harry Potter!

Audio fiction is a form of performance for fiction. You have a story that you want to tell and sometimes you do that with one voice or many voices with sound design or music.

Because I like writing and podcasts and reading stories aloud, I decided to combine the three and launch Tall And True Short Reads. I did an Introduction to Podcasting workshop run by my local library via Zoom, researched microphones and home studio set-ups, and downloaded Audacity, an open-source digital audio editor and recording application. And I watched countless YouTube videos on how to put it all together.

There were challenges. My home office doubles as my podcast "recording studio", and I live in a terrace house in the crowded eastern suburbs of Sydney, surrounded by six-days-a-week building works. And as my dog likes to flop on the floor beside me in the office, the mic picked up all his fidgets, lip smacks and doggy stomach gurgles. 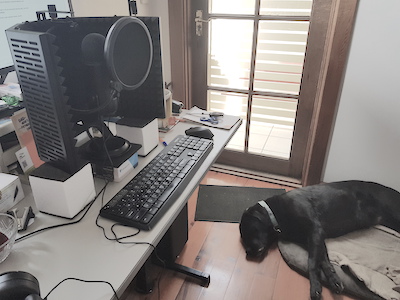 I made a few mistakes, too. For example, I sounded like I was down a well with a pillow over my head on my first recordings. Thankfully, I found VoiceOverMaster, Josh Meyer, on YouTube, and he had some great videos on Audacity and voice settings which helped me climb out of the well and get the pillow off my head for recordings.

And then, having chosen Acast Open to host and distribute Tall And True Short Reads, I made a rookie error with the show notes and descriptions, which were truncated to meaninglessness by Apple and other podcast apps. Again, thankfully, I found tips for fixing this on the internet, including this advice from AudacityWorkshop.com:

When it comes to show notes and episode descriptions: Less is more.

Pardon the pun, but lesson learned!

It was exciting when I finally launched and published Tall And True Short Reads and found it on Apple Podcasts. And I will admit, I've boosted the podcast's popularity by subscribing to it on all the podcast apps I use on my phone. But I promise I have not rated or reviewed it!

The Tall And True website has a dedicated podcasts page with an audio player to listen to Tall And True Short Reads episodes and links to the podcast on popular apps.

At the end of each episode, I give a brief background to the writing of the short story, which should be of interest to podcast listeners and fellow writers.

During Season One (September 2020 to August 2021), I released thirty-two episodes of Tall And True Short Reads. These consisted of seventeen standalone short stories and two multipart instalments, including the most recent extended short story, Both Sides of the Story (Introduction on Apple Podcasts).

For Season Two (from September 2021), I'm expanding the podcast to include my blog posts and other writing from Tall And True. And the podcast has its own website: TallAndTrueShortReads.com

N.B. You might like to read another blog post about how the Better Reading podcast inspired me to buy A. J. Finn's bestseller, The Man Behind The Woman in the Window (February 2019).