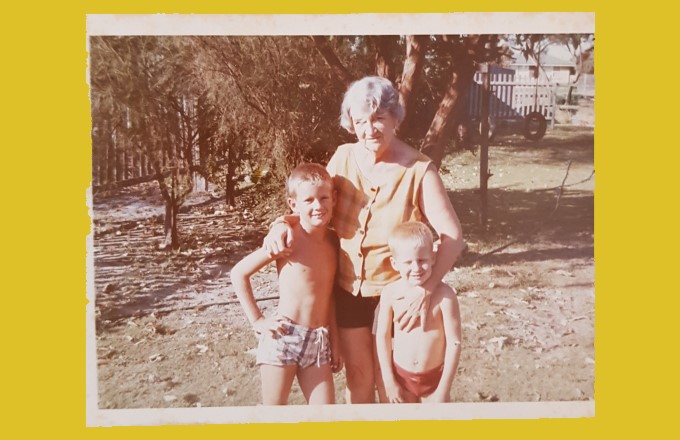 12+   My parents separated in 1967 when I was five, and my younger brother and I went to live with our grandparents. Nan looked old to my young eyes, and leathery Pop ancient. But born in 1907, Nan was only sixty when we moved in, a cause for reflection when I reached my milestone sixty in March 2022.

Nan was still working as a high school cleaner at sixty. She'd leave the house in the morning while my brother and I were asleep and catch a bus to the city to clean classrooms before the school day started. And then Nan would come home in the afternoon to do the housework and cook dinner.

Sixty is the New Forty

The modern-day mantra is "sixty is the new forty". And family and friends reassured me of this in cards, calls and messages on my birthday. Sadly, however, parts of my body have broken down over the years — back, shoulders, knees — and I'm not as "fleet and nimble" as I was at forty.

But at sixty, Nan never complained about a sore back, shoulders or knees after a day of cleaning and housework. And well into her seventies, she liked to demonstrate she was supple enough to bend over and touch her toes.

A State of Mind

Herman Hesse declared, "Age is a state of mind." And though I feel "creaky" physically compared to Nan at sixty, I don't think of myself as "old" in the same way I thought of her back then.

There was talk and laughter at home (she had a lovely laugh), though I don't recall political or philosophical discussions. But then, I was five. Nan read newspapers and magazines and enjoyed Mills & Boon romance novels later in life. And she liked to watch news and comedy and drama on TV at night and daytime soaps after she retired.

At sixty, I don't read newspapers or magazines. But I keep abreast of news via the internet and discuss politics and philosophy with family and friends. And while I'm not a Mills & Boon fan, I have a tall pile of books beside my bed and read (and listen to audiobooks) every day.

As for TV, despite all the streaming services available nowadays, I don't watch a lot of it compared to my memories of Nan and her two channels. And I can't imagine ever sitting down to watch daytime soaps!

Perhaps the main difference between Nan and me at sixty would be our taste in music. Her record collection consisted of Mantovani, Perry Como, Winifred Atwell and similar "old-timers". And as a child, I recall hoping Nan wouldn't embarrass me by playing her records when friends came over after school.

Over the years, I've grown to appreciate the "classics". But at sixty, favourites in my record, CD and MP3 collections and streaming playlists include The Beatles, Pink Floyd and Nirvana. However, it's sobering to realise the surviving Beatles and Floyd band members are now "old-timers" in their eighties and late seventies. And that Nirvana released Nevermind thirty-plus years ago!

Let alone the thought that when Nan listened to Mantovani in 1967, he was fifty-two. And had Kurt Cobain not died in 1994, he'd be fifty-five today.

Earlier this year, I tried explaining "milestone birthdays" to my neighbour's ten-year-old daughter:

"You turned ten last year, and that's a double-digit milestone. Your next milestone will be when you turn thirteen and become a teenager. And then eighteen, twenty and twenty-one. After that, the milestones slow down to every ten years because we're less keen on them as we get older."

I was proud of my explanation until I told her I was celebrating a milestone birthday this year. "How old do you think I'll be?" I asked, making it easier by revealing I'd already had my milestone fifty. "Um, fifty-five?" she ventured.

It occurs to me I looked "old" to her young eyes, whether I was an incorrect (and flattering!) fifty-five or a milestone sixty. Like my dear Nan did to young me in 1967.

Perhaps instead of Herman Hesse, I should end these milestone reflections for my sixtieth with a quote attributed to Mark Twain:

Age is an issue of mind over matter. If you don't mind, it doesn't matter.

N.B. I've also narrated my Milestone Reflections for the Tall And True Short Reads podcast. And you might like to read further reflections on birthdays by a younger me in another Tall And True blog post from 2020, A Birthday to Remember (or Forget?).

I celebrated my sixtieth birthday in March 2022. Milestone birthdays, like sixty, are times for reflection. And as my big day approached, I recalled a treasured photo of my Nan with her grandmotherly arms wrapped around my younger brother and me.

When I dug out the photo and looked at my boyhood brother and me, I realised it was from shortly after we'd moved in with our grandparents in 1967, following our parents' separation. And that meant Nan was sixty in the photo.

Grandparents (and parents) always seem old to children. But looking at the photo of Nan with my middle-aged eyes and then at myself in the mirror, I see things differently. And writing Milestone Reflections was my attempt to put things in perspective.

Is sixty really the new forty? Is age a state of mind? And did Nan act old in her conversations, reading and TV habits or taste in music? Or was my boyhood perspective of her a generational response, like my neighbour's daughter's guess about my age?