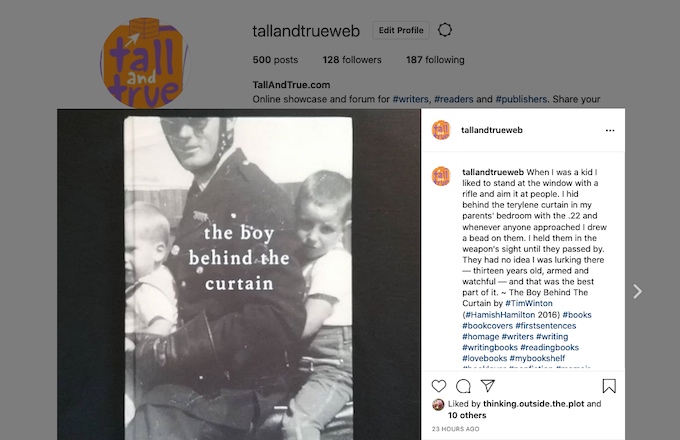 12+   On 11 January 2018, I posted my first #bookcovers and #firstsentences book to Instagram, On the Beach by Nevil Shute. On 5 October 2020, I celebrated my 500th with The Boy Behind The Curtain by Tim Winton. The homage series spans fiction and nonfiction, adult and children's, traditional and e-book titles.

After my first post, it took just three months to reach my 100th milestone in March, A Short History of Tractors in Ukrainian by Marina Lewycka, and then another seven months for my 200th in October, The Knot Handbook by Maria Constantino. And six months later, I wrote a blog post to celebrate my 300th post in March 2019, The Natural World of New Zealand by Gerard Hutching.

As I explained in the 300 Book Covers and First Sentences blog post, one of the goals of the Instagram series was to show off the books on my bookshelf. Another goal was to explore the relationship between book covers and first sentences with the reader.

However, I soon realised my social media laboratory lacked scientific rigour. "Likes" are affected by the number of followers, timing of posts, tags used, what's trending, and how many cat videos were uploaded today.

For instance, on average, my posts receive around a dozen Likes on Instagram. And my most popular, as judged by total Likes, are Long Way Round (106) and Long Way Down (76) by Ewan McGregor and Charley Boorman. Both have good book covers and first sentences. But I suspect their popularity had more to do with the tags #EwanMcGregor, #CharleyBoorman and #motorbikes.

And beyond post tags, the scrolling nature of Instagram means I can't tell if those who stop browsing and Like the book covers also take the time to read and Like the first sentences.

My 400th post in November 2019 was Michael Palin's, Travelling to Work—Diaries 1988-98. And by now, the balance of fiction and nonfiction posts had swung towards nonfiction books.

The reasons for this were threefold. First, early in the Instagram series, I posted multiple books per day to build up a following. Even when I slowed down my posting after a couple of months, I still did daily posts, and these were predominately fiction books. And because my bookshelf is an eclectic mix of fiction and nonfiction books, I needed to reflect this by posting more nonfiction titles.

Secondly, I wanted to include more of the hundreds of children's and young adult books I'd bought for my son from his pre and early-teenage years ... before he stopped reading. (A situation this book-lover dad lamented over in a Bedtime Stories and Teenage Readers blog post.)

And lastly, I do have a finite collection of books on my bookshelf (and in boxes in the attic). Nowadays, I like to pace my posts and mix them up beyond pure fiction and nonfiction.

I've even included e-books, like my short story collection, Both Sides of the Story, a booklet from The Beatles' White Album CD, and a guide book from the National Museum Vincent van Gogh in Amsterdam. And I've branched out beyond my bookshelf to pay homage to library books, like Isabel Allende's, A Long Petal of The Sea.

Tim Winton wrote five of the titles featured in my Instagram posts, and I have another six of his books on my bookshelf. So when I found his memoir in a second-hand bookshop, it felt fated The Boy Behind the Curtain should be my 500th post in early October (2020). 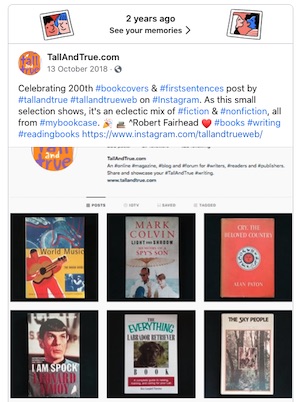 It was also a stark reminder that it took me just ten months to reach 200 posts, but two years and ten months to post 500! Perhaps I could blame COVID-19 and lockdown? But I work from home and could post every day if I felt like it.

The truth is, while I've enjoyed sharing the Instagram posts, it's a bit more time-consuming than simply taking a photo of a book and entering the opening lines. And my writer and editor roles at Tall And True keep me busy, with blog posts like this, short stories, and other fiction and nonfiction writing. And then there's a new audio fiction podcast I've launched, Tall And True Short Reads.