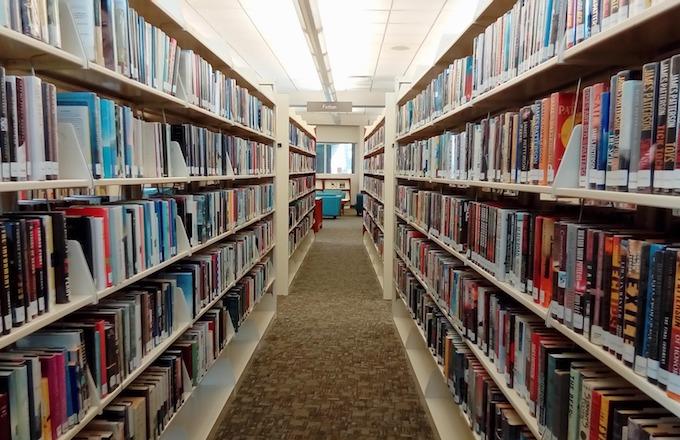 12+   A friend shared a Facebook post from November 2017, inviting the reader to "Step Inside the World's Coolest Library". The futuristically designed library in Tianjin, China (aptly nicknamed "The Eye") is lined from floor to cathedral high ceilings with bookshelves, which follow the building's curved contours.

And, most importantly, for the avid reader, the bookshelves are stocked full of books.

The Tianjin Binhai Library set me thinking about the dozens of libraries I've visited over the years and fondly recalling my favourites. They may not be as architecturally impressive as Tianjin's, but three have left an indelible impression on me.

I grew up and went to school in the Perth suburb of Bayswater. The Bayswater (or "Baysey") Library was the first public library for which I had a card to loan books in my name. And I loved visiting it in my pre and early teens, working out the Dewey decimal card catalogues and locating titles on the shelves.

I don't recall any of the books I borrowed from the library — perhaps some science fiction or a few Biggles adventures ("Chocks away, Algy!" — a classic Biggles' line). But then, it was a long time ago. However, I still remember the joy of being surrounded by books. And the sense of awe I felt at the power of the words between their covers.

I lived in Brighton, England, from 1987 to 1993 and loved visiting the Brighton Library. Back then, the library was adjacent to the Brighton Pavilion, the extravagant Indian inspired seaside retreat built between 1815 and 1822 for George, Prince of Wales. And in fact, the Pavilion's former horse stables housed the library from the 1870s until 2005.

Thankfully, the Brighton Library reeked not of horses but of history and knowledge. And I was a frequent borrower of books, expanding my reading in my late twenties and early thirties, a period I refer to as my "classics catchup phase".

Brighton now has a new Jubilee Library. And while I doubt it has the charm of the old "horse stables", I hope to revisit Brighton one day and browse its new library.

I now live in the eastern suburbs of Sydney, and Waverley Library is my local library. I have loaned countless books, CDs and DVDs over the years. But I will always associate the library with visits with my son to find books. Either for me to read to him when he was very young. Or inspire him to do so on his own when he got older.

Books like Anthony Horowitz's Alex Rider teen spy series, which my son devoured over the school holidays when he was thirteen. Oh, that I could encourage my reluctant reader to do so again!

Sometimes I visit the Waverley Library without borrowing anything. Instead, I stroll about the shelves and recall the joy and awe I felt as a boy back in the "Baysey" Library.

The Future of Libraries

Libraries can be futuristic buildings like in Tianjin or housed in old horse stables. What they all have in common are books.

Despite gloomy predictions about their future in the age of the e-book, I suggest those of us who love reading "traditional" books (and loaning ebooks and audiobooks) will always love libraries.

And some of these libraries will become our favourites!

The Waverley Library remains my local library. But since I wrote this blog post four years ago, my teenage "reluctant reader" has grown older and even more reluctant. And so when I visit the library nowadays, it's for me and not for my son.

COVID-19 and lockdowns obviously affected libraries, and many were closed for parts of 2020 and 2021. However, as they've done with audiobooks and ebooks, libraries adapted and switched to online services. And over the past couple of years, I've attended several talks and workshops via Zoom.

For example, a podcasting workshop run by the Waverley Library during the first Sydney lockdown in July 2020 inspired me to launch the Tall And True Short Reads podcast.

With thanks to RHMLMarketing from Pixabay for their evocative image of a library.

N.B. I've also shared this on my blog at RobertFairhead.com. And I've narrated My Favourite Libraries for the Tall And True Short Reads podcast.