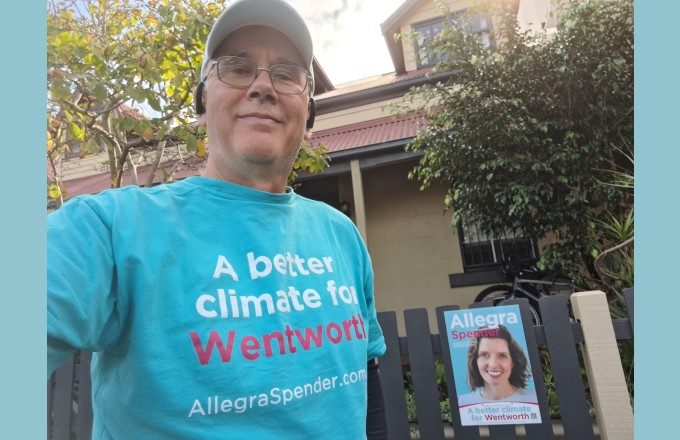 12+   In 2018, I shared a blog post about My Week in Politics, handing out how-to-vote cards for Dr Kerryn Phelps, an independent candidate for Wentworth. Kerryn won that by-election but lost the seat in the 2019 Federal election. Three years later, I spent six weeks in teal helping another independent, Allegra Spender.

2018 was the first time I'd played an active part in politics. I'd made my mid-fifties and felt disillusioned with Australia's political parties. But Kerryn's strong independent message inspired me to do more than shout at the news on TV and social media. And I volunteered for a week at the pre-polling and poll day booths.

I shed tears of joy when our new MP entered the campaign after-party, dancing to the pumping beat of Aretha Franklin's Respect, and took the stage to thank her "purple team". And I was happy to help again in the 2019 Federal election, volunteering for three weeks at the polling booths. However, this time, I shed tears of sadness when Kerryn lost Wentworth to the conservative candidate, Dave Sharma.

While Sharma described himself as a "moderate", the conservative government lurched further to the right following the 2019 election.

In addition, as the Black Summer bushfires of 2019-20 raged across Australia, PM Scott Morrison went on a holiday to Hawaii, claiming infamously, "I don't hold a hose, mate." His wife had to remind him that "rape is bad" after an alleged sexual assault of a female staffer in Parliament. And when the COVID-19 pandemic spread throughout the country, Morrison said of his government's bungled vaccine rollout, "It's not a race."

As Morrison's conservative government's term dragged on, his stock response to every stumble, gaffe and stuff-up became, "It's not my job."

By the end of 2021, I felt disillusioned with politics again and was shouting at the TV and social media. And then I heard local businesswoman Allegra Spender had declared she would be running as a centralist "teal independent" for Wentworth in the 2022 Federal election.

I knew nothing about Allegra, but her posters appeared on neighbours' houses as the campaign took off. Flyers in my letterbox outlined her progressive platform for action on climate change, political integrity, and gender equality. And then, I attended a "Politics in the Pub" event at my local hotel and heard Allegra speak and answer questions in person for the first time.

I had already decided I'd be voting for Allegra at the forthcoming election. But as had happened with Kerryn Phelps, hearing Allegra articulate her strong independent message motivated me to do more. And so, I signed up to be one of her "teal volunteers". 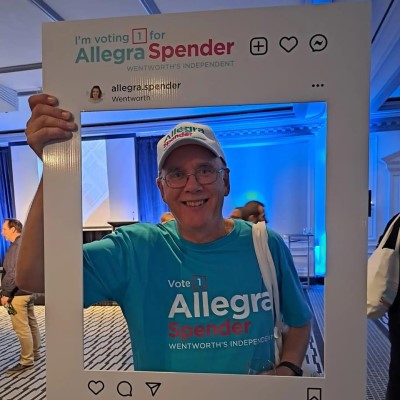 My first campaign event was a "teal wave" at a busy morning peak hour intersection. I joined dozens of other supporters dressed in teal t-shirts, holding up and waving posters of Allegra at passing motorists. It was a chance to meet fellow volunteers and a lesson on the divided nature of the election contest. Although we received many supportive toots, thumbs up and waves back, there were also blaring horns, thumbs down, and angry middle fingers.

Next, I joined Allegra and other volunteers handing out flyers outside a shopping centre. This event was my first opportunity to have a one-on-one conversation with Allegra and see how warmly she interacted with potential voters. And for me to start interacting, too, promoting Allegra and responding to questions about her policies.

Over the following weeks, I attended more and more events, alternating between teal waves and handing out flyers. My involvement with the campaign increased, and I accepted an invitation to be a booth captain for polling day. And then co-booth captain for the two weeks of pre-polling, or "early voting".

As the election drew nearer, I wore and washed my teal t-shirts every day. They were my uniform, and my life was the booth and talking to voters. Everything else slipped into the background: my family, writing and anything unconnected to Allegra and the teal campaign. 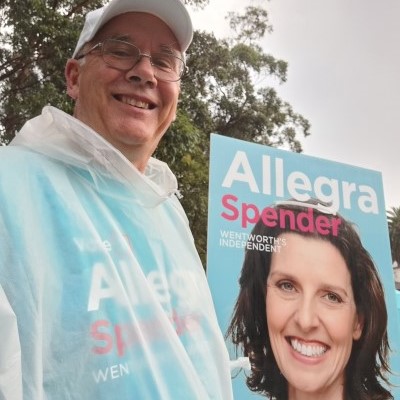 Election day was a blur of setting up our polling booth, handing out how-to-vote flyers and fielding last-minute questions from voters. When the polls finally closed and we started packing up, none of us teal volunteers could say whether Allegra had won or lost. We knew she'd had good support during the day and with early voting, but so had the incumbent Sharma.

Later in the evening, however, when I joined my fellow teal volunteers at the after-poll day party (in a fresh t-shirt), election analysts were predicting Allegra had won Wentworth. And Australia-wide results showed a swing against the conservative government to the teal independents, Greens and Labor.

There would be a change of government, and the teals were an important part of that change!

Then the call went out at the party that Allegra had arrived. There were cheers and tears when she entered the room, fittingly to the pumping beat of Aretha Franklin's Respect. And I shed more tears listening to Allegra's speech, thanking her teal volunteers and setting out her goals as our new MP.

The counting continued, and it took two more days before Dave Sharma officially conceded defeat. I'd joined fellow volunteers as a "teal backdrop" for a local newspaper photoshoot for Allegra that morning. And I was home alone when news of Sharma's afternoon concession came through.

But I was still wearing my teal t-shirt and knew there was only one way to celebrate Allegra's victory. So I put on my headphones and played Aretha's Respect on repeat, loud and proud. Proud of Allegra and her campaign, my fellow volunteers and my six weeks in teal.

And I danced and shed tears of joy again!

N.B. Here's another link to the blog post mentioned in this post, My Week in Politics (October 2018).

I wrote Six Weeks in Teal during the week following the 2022 Australian Federal Election. The "independent teal" I'd supported, Allegra Spender, had won my local Sydney seat of Wentworth. Across the country, there'd been a teal, Green and Labor backlash against the incumbent conservatives. There was a change of government in Australia, and I had been part of it, wearing my teal t-shirt for six weeks.

The goal of this blog post was to explain what had spurred me to play an active part in politics, first in 2018 and 2019 for the independent candidate Dr Kerryn Phelps and again in 2022 for Allegra. And give a flavour of what it felt like to be part of Allegra's teal team.

I could have gone into great detail about the long days of campaigning (often wet and cold), late-night Zoom meetings, conversations with voters and conflicts with the incumbent candidate's team. But instead, I wanted to write the blog post as I will remember my six weeks in teal, something of a blur, as the vortex of the election day approached.

I narrated the blog post for the Tall And True Short Reads podcast on the weekend after the election and apologised for my snuffly and gravelly voice in the episode's Writer's Insight. In her post-election wrap episode of ABC's The Party Room podcast, host Fran Kelly commented election night was crowded with parties (celebrating or commiserating), and COVID had struck down many party-goers and broadcast teams covering the events. And I, unfortunately, was one of them.