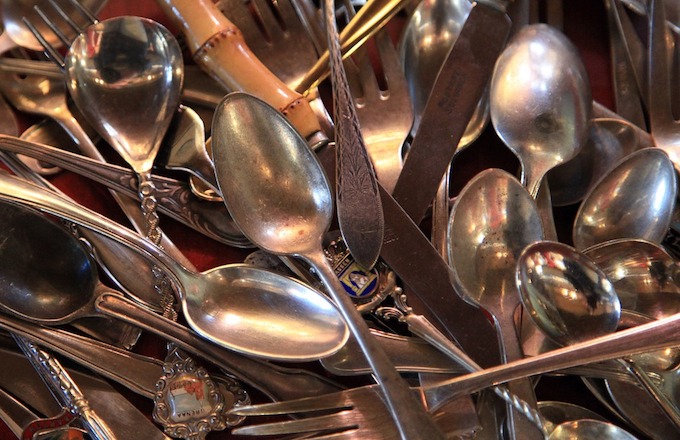 Writing Can Be Lonely

12+   Writing can be lonely, especially if you're living on your own in a cold, cramped flat, in another country, far away from family and friends.

So when I lived in Brighton, England, in the early-1990s, I volunteered to work one afternoon a week at the local Oxfam op shop. I needed to get away from my writing desk, get out of my flat, and meet and mingle with people.

I had seen the old woman in the shop a few times. She'd forage around among the knick-knacks on the shelves for an hour or so. And then walk, slowly, almost reluctantly, to the counter to buy a single teaspoon.

One day she walked straight to the cash register and asked for help to find a frame for a photo of one of her grandchildren. She placed an eight by ten-inch portrait print on the counter and carefully unwrapped the paper protecting it.

The photo revealed her "grandchild" as a stocky twenty-something bloke with a bronze tanned face and a bushy handlebar moustache.

"My grandson looks just like his grandfather did," the grandmother confided. "He works at a coal mine in Australia and flies there from Perth," she went on. "He works long hours and earns lots of money. And he owns a Harley Davidson and a big Valiant. That's an Australian car, you know."

I nodded as the grandmother disclosed the details of her grandson's life without admitting that, like his Valiant, I was an Australian. We'd never spoken much before, other than our usual cash register patter:

"How much is this teaspoon?" she'd ask.

"But I've only got twenty pence with me today," she'd say with a sigh.

"That's okay," I'd say and top up her twenty pence with thirty from my pocket.

It was quiet in the shop that afternoon, so I came out from behind the counter to help her find a photo frame. As we looked, the grandmother continued to talk. Her only son, who lived nearby, had "recently" married his ex-wife's sister. And his ex-wife and their children had moved to Australia to escape the unpleasant "family situation".

The grandmother dearly missed her grandchildren. But at eighty-three years of age, she felt the twenty-four-hour flight to Perth would be too much for her. And she wasn't sure how her former daughter-in-law would receive her.

To compound the grandmother's sorrow, her new daughter-in-law's children were "yobs":

"They lounge about in shorts that leave nothing to the imagination."

In contrast, she spoke warmly of her distant grandchildren:

"There's my grandson who works at the coal mine and another one who restores antiques and ..."

We found a frame for her coal miner grandson's photo and walked back to the cash register.

"Did I tell you my name is Zeeta?" she asked. I shook my head. "But my grandchildren call me Grandma Zeet."

The old woman, the grandmother, Grandma Zeet, said she hoped her grandchildren would visit her soon. "At eighty-three," she said with another sigh, "it's best not to plan too much into the future."

I put her grandson's photo in the frame and rang up the sale on the cash register. It cost three pounds. Grandma Zeet only had one pound in her purse, so I topped it up with two pounds from my pocket. She thanked me and left the shop, and I never saw her again.

As I said, writing can be lonely, especially if you're on your own, far away from family and friends.

That's why I volunteered to work at the Brighton Oxfam shop, to meet and mingle with people. It turned out others felt as lonely as I did, too, and we shared and eased our loneliness on afternoons in the op shop.

With thanks to Bernd Hildebrandt from Pixabay for the teaspoons image.

N.B. This post also appears on my blog at RobertFairhead.com. You might like to read my other observations on England in English Pubs and Last Orders (January 2018).

I recorded my conversation with Grandma Zeet on a single sheet of A4 paper after my afternoon shift at the Brighton Oxfam shop in 1992.

When I unearthed the notes in 2018, filed away with other plot ideas and scraps of writing from that period, I thought of crafting the op shop exchange into a short story.

But as I typed up the words, I realised the piece on shared loneliness shaped nicely as a blog post. And so I wrote and published Writing Can Be Lonely on the Tall And True writers' website in April 2018.

The funny thing is, back in 1992, I hadn't heard of the internet or websites, let alone blog posts!

Update January 2022: I dedicate this blog post to my dear friends from Brighton, Terry and Jacquie. Life was less lonely chatting and sharing a laugh with you guys and our fellow "Maxim muckers" over a few pints before the last orders bell in a warm English pub.

And as a homage to my friends, I've narrated Writing Can Be Lonely for the Tall And True Short Reads podcast.