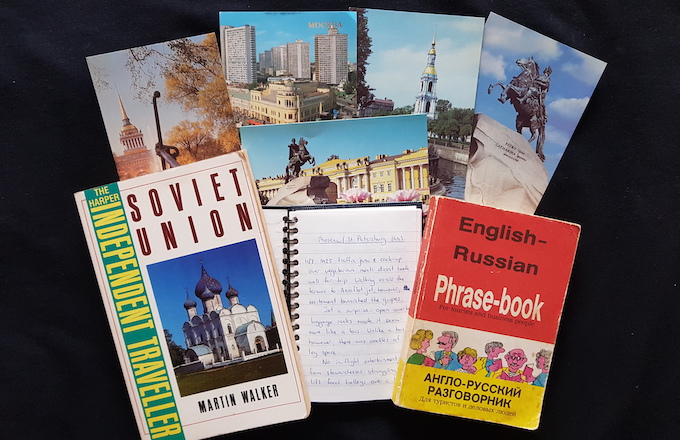 Writing From My Travel Journal

12+   What could be easier than writing a piece based on travel journal entries from seven nights my wife and I spent in Moscow and St. Petersburg? Well, for a start, it was way back in 1993, and I was still finding my "writer's voice". So, many entries are inconsistent and some downright embarrassing.

As I wrote in the Travel Writing blog post (July 2018), I started recording travel journals when I left Australia to backpack and work abroad for two years in 1987. And I kept writing journals and diaries on my daily life in England and wider travels in the UK, Europe, Asia, Middle East and Africa until I returned to live in Australia nine years later in 1996.

My 1993 Moscow-St. Petersberg travel journal was a spiral-bound, A6 feint-lined notebook, perfect for slotting in my daypack. With 15 lines per page, I could record each day's sights and adventures on 12 or so pages by writing front and back. 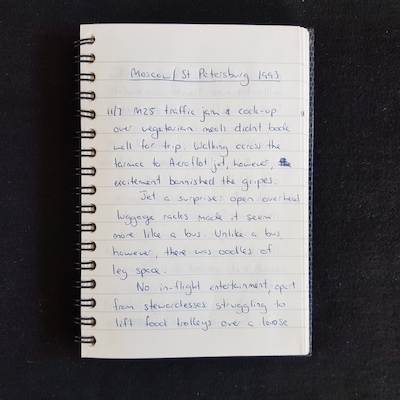 It was fun reading back through the entries especially when the pages refreshed long-forgotten memories, as I admitted in the Thanks for the Memories blog post (September 2018). For instance, the view we had from our Moscow hotel room of the Kremlin, the psychedelic ambience of St. Basil's Cathedral, or that I'd visited Lenin's Tomb and seen the great man's embalmed body.

So armed with the journal, guidebook, Google Maps, (dodgy) memory, memorabilia, and Wikipedia, I was determined to shape my entries into a piece of coherent travel writing. I hoped to share an essence of the sights and sounds I'd experienced in the Russian capitals over seven nights and six long, foot-slogging days of sightseeing.

I would have liked to use my tourist photos. But as I explained in the published Seven Nights in Moscow and St. Petersburg travel piece (June 2019), the original prints and scan-to-digital copies are of variable quality, and they can't compete with the free-to-share digital images available from Pixabay.

I also would have liked to include a photo of the balalaika I bought at the night of Russian folk music and dancing in St. Petersburg. But despite turning the attic cupboards upside down and inside out I could not find the instrument. (Perhaps one day I'll read of its fate in another old diary entry?)

I was able to include photos of other memorabilia, like my Russian Leaders dolls (1993-1917), English-Russian phrasebook, and the cheap postcards we bought in St. Petersburg (but were too cheap to write or post to family or friends!). 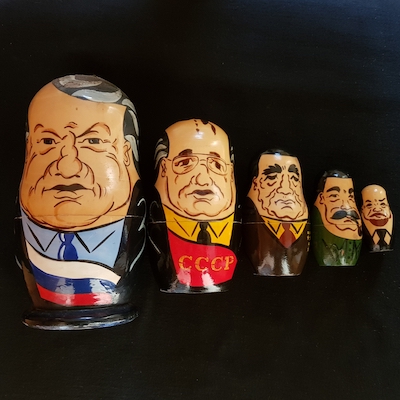 The travel piece took longer to write and make consistent (and less embarrassing) than I had planned. However, the delay proved a blessing.

My father and his partner travelled to Moscow and St. Petersburg in May 2019 (before I'd published the piece in June). They, too, had seven nights away and enjoyed long days of sightseeing in the Russian Capitals. And when visiting the Kremlin, my father reported he thought they had seen Vladimir Putin in a cavalcade of extra-long black cars.

But like me with Boris Yeltsin back in July 1993, my father failed to take a photo to confirm his sighting.

Oh well, at least it made the travel journal!

N.B. Here is a link to the published Seven Nights in Moscow and St. Petersburg. You might also like to read this travel piece, Three Visits to Dahab (Egypt).