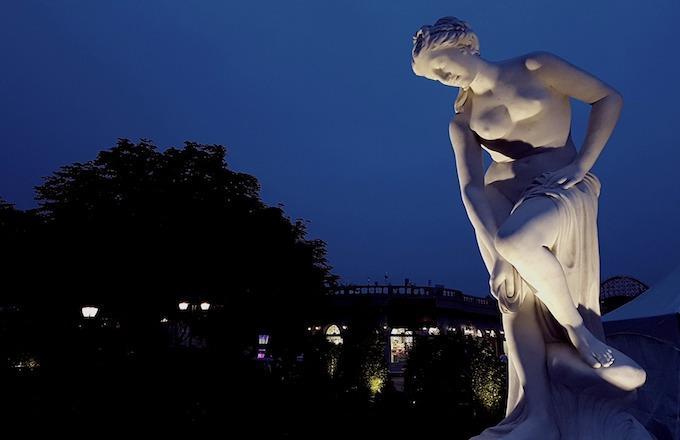 Chapter One - The Manor House

12+   "And now the piece de resistance of the Manor House grounds," the old Colonel announced, leading his younger guest to a sunlit garden. "What do you think, Mr Evans?" he enquired, waving his walking stick at the garden's centrepiece. Toby Evans stepped forward and circled the white marble structure. A life-size sculpture of a man and woman, standing face-to-face on a marble pedestal, hands caressing each other tenderly and lips fused in a kiss.

"It's um, interesting, Colonel," Evans commented, making a note of the sculpture and its location. "Does it have a title?"

The Colonel chuckled and joined Evans beside the figures. "Adam and Eve. Not very original, I'll grant you. I found the star-crossed lovers while on tour in the Middle East. The merchant swore it was two thousand years old." The Colonel chuckled again. "Less than that, I'd say. Still, she, ah, they caught my eye, and I thought Adam and Eve would look at home here in the Manor's South Garden."

Evans made more notes and took some photos. The Colonel sidled up beside him, and in a croaky, conspiratorial whisper added, "Regardless of the actual age, it's a moving sculpture. And I fell in love with it the moment I saw them. Or, between you and me, Mr Evans, the moment I saw her."

Evans stifled a laugh and, keen on humouring his old host, asked, "What do you mean, Colonel?"

The Colonel straightened his back. In a firmer voice, he replied, "I mean, Mr Evans, that she, Eve, is the perfect representation of the female form. This fellow," the Colonel tapped the male figure with his walking stick, "is common, brutish. The craftsmanship is competent, but no more than that. He's more Alf than Adam. But Eve —" The Colonel lowered his walking stick and gazed adoringly at the female figure. "Eve is a goddess, sculptured by the loving and devoted hands of a genius."

Evans turned back to the sculpture so the Colonel wouldn't see his mocking smirk. He reached out and ran a hand over the figures and was surprised how smooth the female's lines felt compared to the coarser finish of the male. There was something else, too. Eve was easy on the eyes and more aesthetically pleasing than Adam. It was the contrast between Beauty and the Beast.

"Do you think it's the work of two different craftsmen, Colonel?" Evans asked, dragging his hand and eyes away from the sculpture.

"Yes, I do, Mr Evans. And another thing, I don't believe they're lovers." The Colonel waved his walking stick at the figures again. "Study their arms. Can you make out the taut tendons? There's tension in their embrace. And look at their eyes, Mr Evans. Do you see it?"

Evans stared up at the recessed curves of the open-eyed Adam and Eve. "I may be too old for that sort of stuff nowadays," the Colonel chuckled, "but when I was a younger man, Mr Evans, lovers kissed with their eyes closed."

A bell rang out across the garden. "Ah, that will be Mrs Stubbs. If there's anything else you'd like to know about the Manor House and gardens, Mr Evans, perhaps we can discuss it over one of her famous cream teas."

"Of course, Colonel," Evans replied with a generous smile, "though I think I have all the notes and photos I need. You've been most helpful and informative."

"Good, I look forward to reading your magazine piece in Country Estates and Gardens," the Colonel responded enthusiastically. "The old Manor can do with a spot of promotion. Hopefully, it will help boost our visitor numbers," he added. "Right then, let's bid these so-called lovers adieu and see what Mrs Stubbs has baked for us, shall we?"

The Colonel turned and limped towards the Manor House. Evans followed, pausing at the edge of the garden for a farewell look at the sculpture. He took another photo. The Eve figure was uncommonly beautiful. And even with her less desirable partner, Evans knew the marble sculpture was worth a tidy sum. He made a final note, slipped his notebook into his breast pocket and patted it with a self-satisfied smile.

"Jonesy, it's me, Toby. Slight problem, flat battery. Yeah, well, believe it nor not, the old codger's offered to put me up for the night. I know, I know, it's risky, but I thought he might get suspicious if I refused. Yeah, I'll get the car fixed first thing tomorrow. Wait until you see the list, Jonesy. This Manor House will be our best haul yet!"