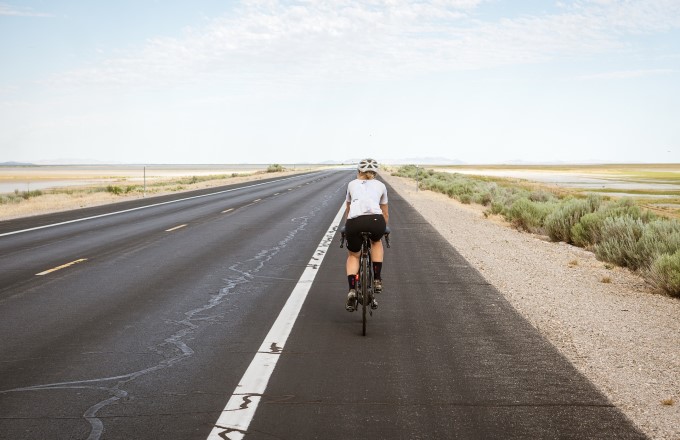 12+   FRANK: We hit the road at sunrise. Anna complained about packing the bikes in the pre-dawn dark. But we had to make up for the kilometres we'd lost yesterday to punctures and her mishap. The reward for our bleary-eyed start was riding through a crimson landscape when the sun crested the horizon. I rode ahead, and Anna fell behind, as usual.

ANNA: The four-day tour was Frank's idea. We'd taken up cycling after the kids left home, joining other MAMILs and MAWILs doing weekend circuits in the park. I grew to enjoy the rides and conversations at the rear of our regular group while Frank rode up-front. But I'd never contemplated a longer ride. And I was tired and sore after a dispiriting first day of puncture repairs and falling into a ditch.

FRANK: I'd bought matching bikes for our thirtieth wedding anniversary. Anna had rolled her eyes, but we were both carrying middle-aged padding and needed the exercise. She'd also been unenthusiastic about the weekend group. But before long, Anna seemed to find her place cruising and gossiping at the back. Though, I'd urged her to put in more effort and join me at the front of the peloton.

ANNA: I should have stood my ground and said no when Frank suggested we set off at dawn. But that's the story of our marriage. He hatches grand plans, ignores my protests and browbeats me into following him. He was the same with the kids. That's why they moved out, and I couldn't blame them. I've wished for the courage to leave Frank several times, too.

FRANK: Looking back, I may have pushed Anna a bit hard. We should have spent more time preparing the bikes and building up our endurance for longer daily distances. Maybe then she could've kept up with me? Or perhaps I should've paced myself and waited for her?

ANNA: Frank disappeared around a bend, and I was alone, again! For a few minutes, I fantasised about doing a U-turn and riding away from Frank and our marriage. But instead, I put my head down and pedalled harder. I heard a crow cawing at the roadside and then the blast of a horn and squeal of tyres.

FRANK: I can't open my eyes or speak or move my body. But I can hear and think. I'm in a hospital. I don't know how long I've been here. An unfamiliar male voice said something about a coma. Anna's here, too. I've heard her over the electronic beeps and wheezing of what sounds like a bellows. She's speaking again, "Can you hear me, Frank?"

ANNA: The police said the driver was blinded by the sun when Frank's bicycle crossed the road at the bend. He's been in a coma for two months. At the start, doctors warned me to be patient. Now they're asking for my signature to disconnect life support. I half-expect Frank to wake and tell me what to do. But for once, it's my choice.

With thanks to Brent Olson from Pixabay for the image of the bike on tour.

The Choice was my new year entry for the Australian Writers' Centre's monthly short story writing competition, Furious Fiction. The brief for January 2021 was:

The plot and characters for the story came to me while walking my dog, similar to my December 2020 Furious Fiction entry, The Gift. I decided on a middle-aged couple on a bike tour that goes awry. And I wrote it as a two-hander, with Frank and Anna's voices and thoughts revealing a shorthand tale of the ride and their life together.

The sunrise start was an easy decision. The choice at the end was more difficult, and I leave it to the reader to imagine what Anna decided to do with Frank’s life support.

As for the words in the Furious fiction brief, I like playing with positioning them in my short stories. And this time, I held off using the words until the final paragraph.