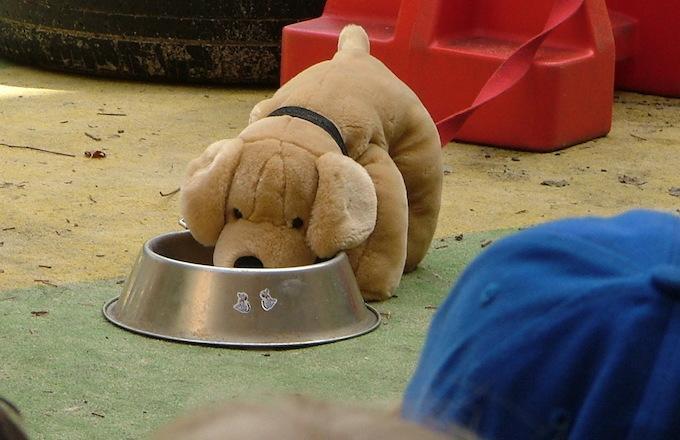 Can I Pat That Dog?

-12   Last year I talked to the children at my son's childcare centre about dogs and the important question, Can I Pat That Dog?

I divided the talk into three parts:

I showed photos of happy, fearful and angry dogs and explained to the children that they must ask permission from their carer and the dog's owner before approaching a dog – even a happy looking one.

I used my dog, Harry, a well-trained 8-year-old Labrador, to demonstrate parts two and three. Not surprisingly, the training and tricks proved most popular – closely followed by patting Harry afterwards, the children remembering to ask permission.

Ask the dog, too!

This year I gave a similar talk at the childcare centre, but having learned of the SPOT (Safe Pets Out There) program, I modified part one to include "asking" permission of the dog, too, by interpreting its body language.

Funded by the NSW government, SPOT is a "schools program about pet care and kindness and respect for all animals. It incorporates a specific module about safe behaviour to reduce the incidence of serious dog bites in children."

I added a toy dog to act out body language scenarios from an excellent book, "Can I pat that dog?" (McLaine, Damiani & Power, Angus & Robertson 2004): No, he looks angry, frightened or old. No, he's tied up, on guard, working, eating or sleeping. No, she has puppies. And finally – Yes, he looks happy.

Dog owners and parents/carers have shared responsibility to ensure that children are safe around dogs. Dogs must be well trained and under control around children. And children must be taught to ask permission from their carer, the dog's owner and the dog before approaching it!

In most cases, the answer will be yes, and the dog may wag its tail and roll over for a tummy pat like Harry did at the childcare centre, a safe and enjoyable experience for the children and the dog.

This article appeared in the Village Voice Eastern-Harbourside in May 2007 and in my dog club newsletter.  The Can I Pat That Dog talk proved so popular, I used it for school holiday programs for several years, until it was time for Harry to retire.