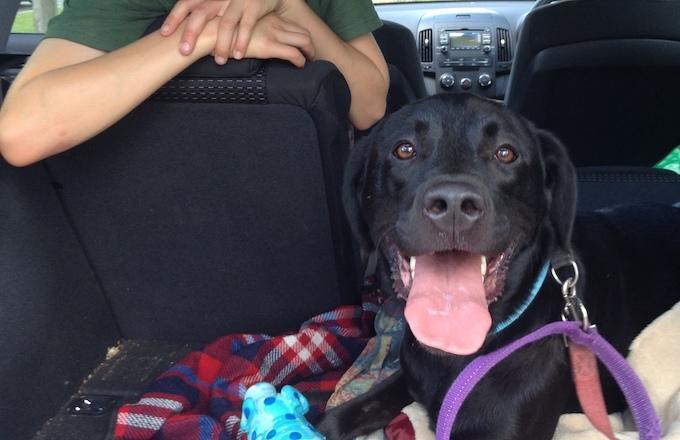 -12   Jet joined our family in March 2014. It had been two-and-half years since we'd lost our dear old Lab, Harry, and Jet was two-and-half years old at the time. It seemed a good omen. However, we were Jet's fourth family! Why had he had so many homes? What had happened to him? Was he unruly and aggressive?

Jet's "baggage" soon became apparent. It included anxiety at venturing outside into the backyard and at being left home alone. Jet was happy to go for walks, but pulled like a sleigh dog and was reactive around other dogs and cats. He wouldn't return when we let him off-lead in the park (not even for food!). And, despite a desire to stay indoors at home, if Jet spied a crack in the front gate, he'd nose it open and bolt off down the street, leading us on a less than merry chase!

After the first stressful week, and with fond memories of my pliant, well trained old Lab, I was worried we might have adopted the wrong dog. When I expressed my concern to my son, he burst into tears and said, You're an instructor at the dog club. If you can't sort out Jet's problems, who can?

My wise young son was right on both counts. I've been a volunteer instructor at a local dog club for over a dozen years. In my adult dog classes, I see an increasing number of adopted dogs, and I teach owners how to settle these dogs and be responsible owners.

Giving up on Jet so soon was not being a responsible dog owner!

Two years on and we've come so far with Jet. He still doesn't like being left alone in the backyard but will venture outside on his own to sprawl on his bed and chew a favourite toy. And he can be left home alone, inside the house, on his bean bag, with a Kong, stuffed with a few treats, and his toys.

Jet doesn't pull on his lead so much when walking, except if he sees another dog or, heaven forbid, a cat! I use a balance harness with Jet, with rear and front lead attachments. And using the harness like a puppeteer and with cue words and treats, generally redirects his attention and stops the pulling!

Jet's still reactive. But again, with cue words and treats and sufficient distance and warning (I've learnt to recognise his vocalising when he spots another dog), problems rarely arise. And when they do, it's usually triggered by an off-lead dog running at Jet in the park or on the streets.

Jet is let off-lead in the park to chase a ball. He doesn't always come back, especially if he spies other dogs. But a range of techniques including waving his ball and dog treats work, eventually. Though often he's only following another dog attracted by the treats! And given half a chance, I think Jet would still bolt out the front gate and run off to the local park.

I know it may not sound like we've come far with Jet. But he's still with us, we've kept him safe and healthy, he's kept us on our toes and has become a loyal companion!

It's taken time, patience and persistence. Jet's had to learn our ways, and we've had to learn his. He is not our old Lab, but he is a dear member of the family, and we are his forever home.

So thank you, Labrador Rescue for bringing Jet into our lives. And to my son for your wise words.