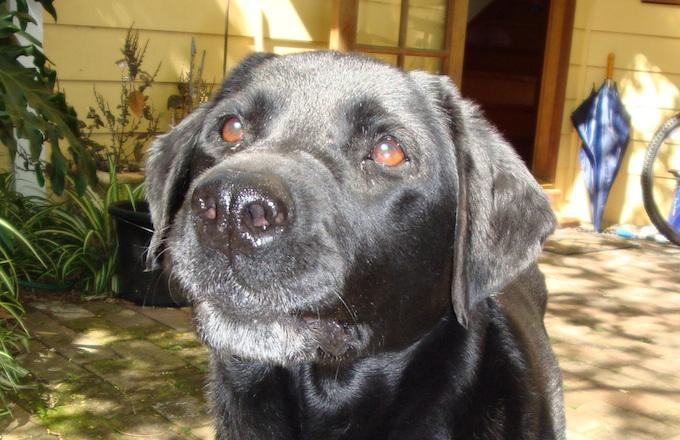 -12   My lab, Harry, is almost eleven-and-a-half years old. He's never been a very energetic dog. And as I've commented to my classes at the local dog training club, his heeling in obedience rings was like dragging around a reluctant sack of potatoes!

But recently, it's become evident that age is wearying Harry even more. Our walks are shorter, and if we're out for too long, I almost have to carry him home.

However, this hasn't stopped him from wanting to play chase back home. And Harry hasn't forgotten his training.

The other day I proved you can teach an old dog a new trick! I was brushing Harry after our walk, and he was pawing me to hurry up (he gets fed after his brush) when I thought I'd take advantage of the pawing and teach him to Shake.

Every time he pawed me, I said "Shake", grabbed his paw, gave it a shake and rewarded him with "Good dog" praise and pats.

And within only a few minutes, Harry was shaking on command, and we had another trick to show off at the dog club.

Yes, I know it's very basic, and some dogs are born seemingly knowing how to shake paws. But until the other day, Harry didn't do it on command.

Shake may be an old trick, but it's a new one for my old Harry! And it proved fun and rewarding to teach an old dog an old trick!