Travel Writing on Tall And True 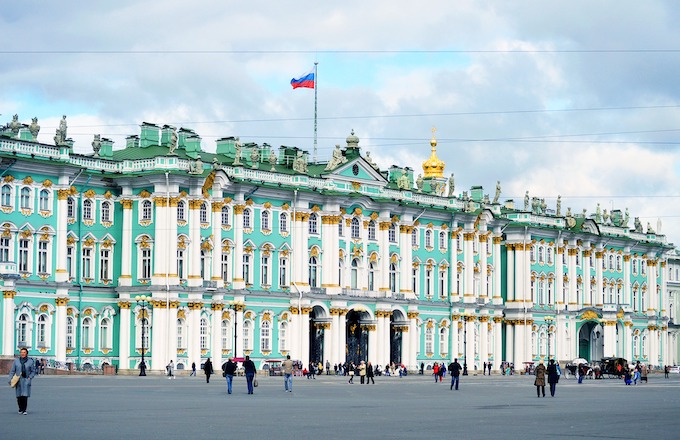 12+   Slept soundly, only waking whenever our train ground to halt and there was no comforting clickety-clack. Guard woke us at 7 AM, leaving compartment door open. Music blaring from corridor ensured we didn't fall back to sleep. As did serving of hot, sweet tea, in glass tumblers with pewter handles.

Click here to read Part 1 of Seven nights in Moscow and St. Petersburg, my travel journal entries from Moscow.

Pouring rain when we pulled into St. Petersburg. Dodged puddles on the platform and waited for our new Intourist guide to lead us to the bus to the hotel. After Leningrad Station, I felt embarrassed following her raised brolly but didn't let it or her out of my sight.

There was a delay with check-in at the hotel: our rooms were either occupied or not yet cleaned. A big hotel breakfast helped fill the time and our stomachs. However, several in the group began griping about the delay and food etc. and one middle-aged Englishwoman made me grateful I could claim to be Australian, not English.

We finally claimed our room and had much-needed showers. Still raining outside, so we dozed, and I caught up my journal entries. Spent a pleasant two hours writing and gazing out the window at the wide River Neva, the cars running along the river and crossing its bridge, and the occasional tram and trolley bus. So hard to believe an iron curtain once separated Russia from western Europe.

The sun broke through mid-afternoon, and we went for a wander. Jumped on a trolley bus heading down Nevsky Prospect, the main street of St. Petersburg. Once again, risked being caught without a ticket because we couldn't work out how to buy one. Feared "dumb tourist" excuse wouldn't work, so hopped off the bus (before we got caught) and started walking.

The buildings and canals along Nevsky Prospect brought back memories of Amsterdam -- hardly a surprise, as our guidebook said Peter the Great had designed his city based upon the Dutch capital. The people seemed even more western European than in Moscow, too. And there were few beggars compared to Moscow.

Stopped to take photos of Kazan Cathedral. The entrance is at the centre of a massive arched colonnade, above which soars the cathedral dome. During the Communist years, it was the Museum of Atheism, but its religious purpose has been re-embraced with the fall of the Soviet Union. 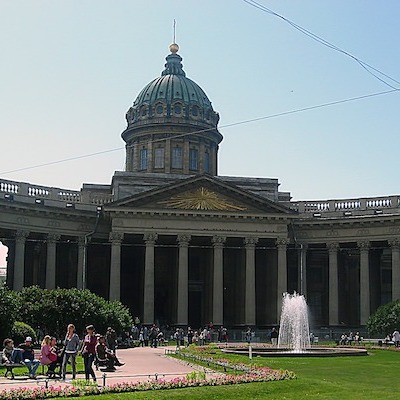 Image by Jori Samonen from Pixabay

Opposite Kazan Square and down a canal, we spied another "St. Basil's" in the distance, with similar brightly coloured domes. It was a happy sight, as we'd both been sad to say goodbye to St. Basil's in Moscow.

The walk along Nevsky Prospect took us past so many picture postcard buildings, squares and parks, it made St. Petersburg feel like a living museum.

Off Nevsky Prospect, opposite a park, we saw another towering dome above St. Isaac's Cathedral. We could see figures scurrying about scaffolding on the roof and initially thought they were builders. But as we got closer, we realised they were sightseers. Paid the 100 roubles entrance fee and went inside to join them.

It's difficult to convey the size and scale of St. Isaac's. Huge, massive, enormous, don't do it justice. I strained my neck to try and take it all in. It's also rich in colour, with gold gilt, oil paintings, and mosaic tiles. Put simply, St. Isaac's was outstanding. Would have loved to climb to the top of the dome but it had closed for the day.

We continued to River Neva and turned towards Winter Palace-Hermitage Square. At the tourist end of the cobbled square, beside the rows of coaches, we saw the sad sight of a bear cub on a lead. Tourists posed for photos with the cub, roughing up its head as if it were a dog. The cub didn't seem too upset by the experience but was not happy when its owner shoved it in the boot of his Lada before driving away from the square.

It was too late in the day to visit the Hermitage Museum, so we carried on along the canals to the St. Basil's look-alike, the Church of the Savior on Spilled Blood. Up close the church wasn't as impressive as St. Basil's: it was too square and glossy. But, with its canal-side location, it did look good from a distance. 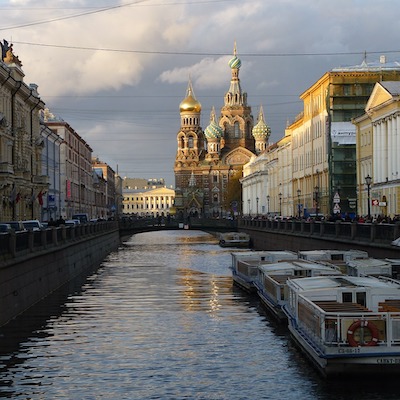 Image by dasgestiefeltemaedchen from Pixabay

We crossed a bridge to the Field of Mars, the burial ground for those who died in the 1917 revolution and subsequent civil war. Sat on a bench in the middle of the park, soaking up the late afternoon sunshine, watching the antics of three young boys stealing apples from an apple tree.

Refreshed, we tried to book a ferry trip on the Moyka River but were told, "Nyet." So we turned down a canal and bumped into another ferry about to set off. Paid US$3 each (Intourist had wanted US$7 for their excursion) and climbed aboard.

Tour lasted an hour, cruising past many places we had seen on foot. The commentary was in Russian, and we had to judge whether to look left or right for the sights by the swivelling of the Russian-speaking tourists' heads. Though I did catch Rasputin's name, so we must have passed the building where he was poisoned and thrown into the canal.

Salary of a University Teacher

Walking back to our hotel, we passed an upmarket cafe and decided to treat ourselves for dinner. Shared a table with Belgium couple on a four-week tour of Russia and Ukraine. They were staying in St. Petersburg with a family, a sort of home-style-B&B, and consequently had learnt more than us about Russian life.

The mother in the family was a university teacher and earned 20,000 roubles a month. Our dinner with drinks had cost US$30, one-and-half times her monthly salary. Felt uncomfortable doing the calculations, especially as we weren't eating at The Ritz!

Pouring again when we left the cafe but decided we'd walk back to the hotel. The sky was still lightish, even with the clouds. It was like the light of a full moon, and it had just gone midnight. I wondered how light it would be on a clear night.