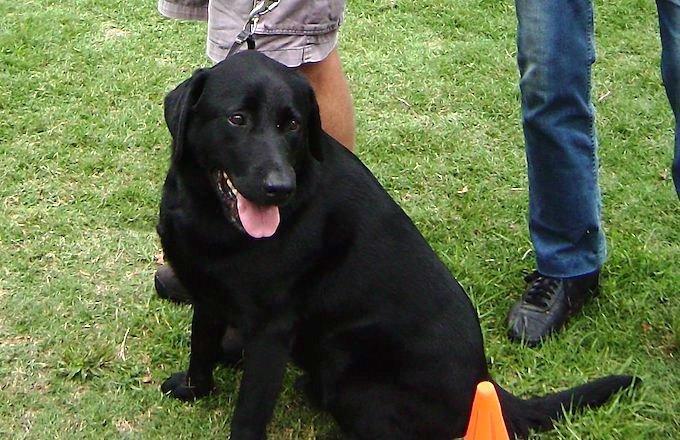 Blind Faith in a Dog

-12   Each year, my local dog club runs a season-ending Fun Day with events designed to be fun and to test the bond between club members and their dogs. Our most popular events include fancy dress (for dogs and owners), an agility-type slalom, a saveloy race (relay, not eating!), the waggliest tail and an event we call the "Ned Kelly".

In the "Ned Kelly" event, you wear a bucket on your head, through which you cannot see (hence the name). With your dog on-leash beside you, you must walk straight from one end of the competition ring to the other. Hold the line, and you will walk into a witch's hat at the other end and win the event.

Walking in a straight line "blindfolded" for more than a few paces is not easy, especially with a dog beside you. Most competitors soon stray to the right or left, pulling or pushing their dogs off course.

A few years back, I reasoned that being a Guide Dog breed, I could train my Labrador, Harry, to lead me to a witch's hat. I had one week to do so before the next Fun Day.

I started by leading Harry on-leash to a witch's hat on top of which I'd left a piece of carrot. As we walked towards it, I repeated the command, "Hat, hat, hat", so that Harry associated "hat" with the witch's hat and the carrot reward.

Then I removed the carrot from the witch's hat, led Harry to it and waited for him to sit before rewarding him. My carrot loving dog soon led me blindfolded to the witch's hat.

At the Fun Day, I entered the "Ned Kelly" ring with Harry, put the bucket on my head and gave the command, "Hat". Harry dutifully led me straight across to the witch's hat, where he got his carrot reward.

Since that Fun Day, I've demonstrated the "witch's hat" trick as an instructor many times as an example of what's possible with dog training.

And it's an example of having blind faith in your dog because I have to trust that Harry will lead me to the witch's hat … and not in front of a truck!

This article appeared in the Village Voice Eastern-Harbourside in March 2008. The "witch's hat" trick proved particularly popular with children, in Harry and my "Can I Pat That Dog" workshops.