Health & Lifestyle on Tall And True 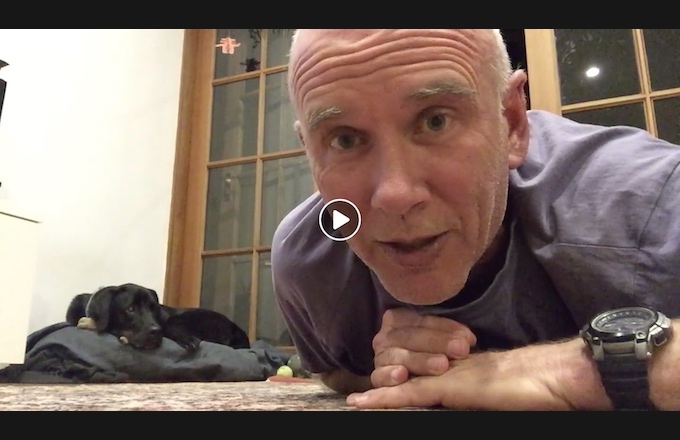 12+   In 2016, I took part in the 22 Pushup Challenge, 22 days of 22 pushups, with each day’s effort posted to Facebook. The goal was to raise awareness of the effects of Post-Traumatic Stress Disorder (PTSD) on returned service personnel. At the start, I struggled to do 22 pushups and knew little about PTSD.

The 22 Pushup Challenge was also known as #22KILL on social media, taking its name from the sombre fact that an average of 22 veterans a day commit suicide in America. In Australia, Michael Smith News quotes a Walking Wounded report (January 2016) that 239 returned Australian soldiers took their lives between 1999 and 2016.

I was nominated by two friends on Facebook to do the 22 Pushup Challenge. In turn, I was supposed to nominate a new friend to take up the challenge each day I posted my pushups videos.

However, rather than nominate someone new, I posted links to articles on PTSD and related resources with my Facebook videos. And over the 22 days, as I grew stronger doing my pushups, the PTSD links grew longer and more informative.

Below is a summary of the PTSD links and resources I researched during the 22 Pushup Challenge — please feel free to share them:

Day 1: #22pushups for #22KILL website (transitioned to One Tribe Foundation in 2020) with background on the 22 Pushup Challenge and its goals. And a link to the #supportwalkingwounded article (January 2016) on Michael Smith News with the sad figures for Australian returned soldiers.

Day 2: History of PTSD — Explores PTSD from early times to WWI and WWII, Vietnam and through to modern-day conflicts.

Day 3: Beyond Blue — Provides an overview of PTSD, the signs and symptoms, a checklist, and a summary of treatments available.

Day 5: Dogs and PTSD — Article from US National Center for PTSD on research on how dogs are helping people living with PTSD.

Day 6: US Dept of Veterans Affairs: National Center for PTSD — Resources for Veterans, General Public, and Family and Friends.

Day 7: The Man in the Gray Flannel Suit by Sloan Wilson. This classic book deals with the dislocation felt by an American soldier who returns home to his wife, house in the suburbs and corporate working life after fighting in Europe during WWII. The book (and equally classic film starring Gregory Peck) is based on Sloan Wilson‘s own experiences, of which he said:

“I really don’t know what I was looking for when I got back from the war, but it seemed as though all I could see was a lot of bright young men in gray flannel suits rushing around New York in a frantic parade to nowhere. They seemed to me to be pursuing neither ideals nor happiness – they were pursuing a routine. For a long while, I thought I was on the sidelines watching that parade, and it was quite a shock to glance down and see that I too was wearing a gray flannel suit.”

Day 8: British Army do the 22 Pushup (Press Up) Challenge (on YouTube) – Underscoring the global challenge of PTSD.

Day 9: Invictus Games Foundation — How Sport and Exercise can help during and following treatment for PTSD.

Day 11: PTSD: A Solider’s Perspective — A blog of personal experiences, with the warning, “This site contains emotionally charged and graphic accounts of Combat PTSD, MST and TBI.”

Day 12: Picking up the Peaces (on Facebook) — An organisation established in 2008 to support, educate and raise national awareness of Post Traumatic Stress Disorder.

Day 13: The Battle After the War — ABC News 24 piece on the cost of Australia’s decade at war in the Middle East.

Day 14: Robert Koger, Death’s Revenge (2013) ~ “The brave men and women, who serve their country and as a result, live with the war inside them and exist in a world of chaos. But the turmoil they experience isn’t who they are; the PTSD invades their minds and bodies.”

Day 15: PTSD and Me — True Stories From Military Veterans published on Gawker blog.

Day 16: PBS News (November 2014) — US veteran leads clean-up of Vietnam War’s lethal remnants in the hope to make amends for an “unclosed chapter” in his life.

Day 17: Australian Department of Defence Health Portal on PTSD —  PTSD explained, symptoms and how to get help for ADF members and veterans.

Day 18: PTSD and Addiction (drugs and alcohol) — Having had a few drinks before doing my evening pushups, I was interested in this Foundations Recovery Network article.

Day 19: ABC News article (October 2016) — How Tasmanian war veterans with PTSD are learning to help themselves and each other.

Day 21: Children of Veterans & Adults with PTSD by Jennifer L. Price PhD, on the American Academy of Experts in Traumatic Stress website.

I commented in my final Day 22 Facebook post I’d had fun doing the 22 Pushup Challenge (with the “help” of my nosey dog!). But there was also sadness in the cause behind the pushups.

In 2003, I joined 250,000 marchers in Sydney to protest against the Iraq War. I feared the cost of the war to Iraqis. And I felt the same about the war in Afghanistan. But I hadn't factored in back in 2003 the cost of the conflicts to the "Coalition of the Willing" servicemen and women.

Australia’s then Prime Minister, John Howard, dismissed Sydney’s anti-war marchers as “the mob”. In future, we must hold our governments to account and not let them reject our concerns with a “Heh, heh”, as Howard did after his backslapping trip to America.

On my Facebook soapbox, I urged friends to ensure our governments adequately compensate and care for current and returned service personnel and their families — they don’t have a say over disastrous deployments to foreign lands!

This remains as important in these “strongman” times of Donald Trump’s America as it did in 2003. Otherwise, sadly, songs like A Soldier’s Memoir by Joe Bachman, which I posted on Day 22 of my 22 Pushup Challenge, will continue to be sung.

There’s a new 2020 challenge on Facebook, 25 Pushups for 25 Days, with the similar aim of raising awareness of PTSD, anxiety and depression. I don’t know that I can do 25 pushups nowadays.

However, it inspired me to check the links from my 2016 Facebook posts and share this piece on Tall And True.

Update July 2020: I completed the 25 Pushup Challenge - 25 Pushups for 25 Days, sharing my experience with more quotes and resource links.