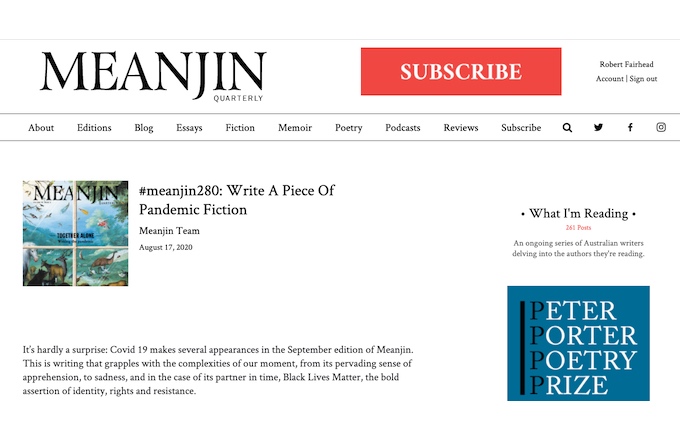 12+   To promote their September 2020 edition, Meanjin Quarterly announced a Pandemic Fiction challenge on Twitter. A one tweet story on the COVID pandemic, using the hashtag #Meanjin280. The prize for the best ten tweets: a twelve-month magazine subscription and publication on Meanjin's blog. I tweeted three stories.

My first attempt at "Twiction", flash or microfiction on Twitter, was in November 2017, when Meanjin ran #Meanjin280 to celebrate the introduction of 280-character tweets. I blogged about the writing experience in We Need to Talk (Microfiction), commenting on how the beginning and end of the story came to me first. And all I had to do was navigate concisely from one point to the other.

Three years on, while the three pieces flowed more smoothly from beginning to end, conciseness was still an issue. Perhaps I need 560-character tweets? 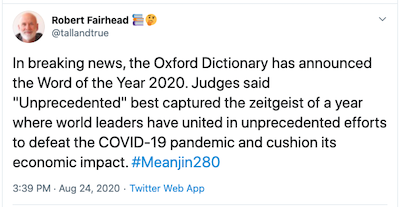 Just a Sniffle received a sharp rebuke from one of my Twitter followers who tweeted back, "GET TESTED!" Thankfully our follower-friendship was restored when I let her know the tweet was fiction for #Meanjin280. But I was proud it had triggered the response.

I had fun with COVID Conspiracy, contrasting anti-left conspiracy theories with the universal need for a social welfare safety net. But my favourite piece was Unprecedented. Oh, that the story's premise world leaders had united in unprecedented efforts to defeat the pandemic and cushion its economic impact was not fiction!

The Meanjin Pandemic Fiction challenge inspired me to write and tweet three pieces of microfiction. And, regardless of the judges' decision, to subscribe for a 12-month digital subscription to Meanjin's quarterly magazine and support other writers.

The challenge closes at the end of August (2020). I don't need the subscription, but fingers crossed, at least one of my stories makes the Meanjin blog. I'll let you know ...

Meanjin published the winning #Meanjin280 tweets on their blog on 2 September (2020), and *big sigh* none of mine was among them. But on the bright side, the tweets were all worthy winners. And, I wrote one more Pandemic Fiction piece, fittingly titled, New Normal before the challenge closed: 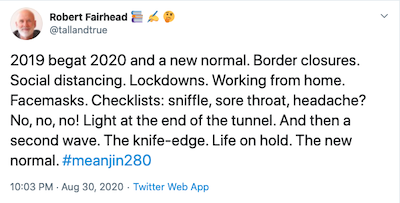 Although my tweets didn't make the #Meanjin280 winners' list, I wrote four new pieces of microfiction AND subscribed to Meanjin's quarterly magazine thanks to the challenge. And that's something to be doubly grateful for during this wretched pandemic!