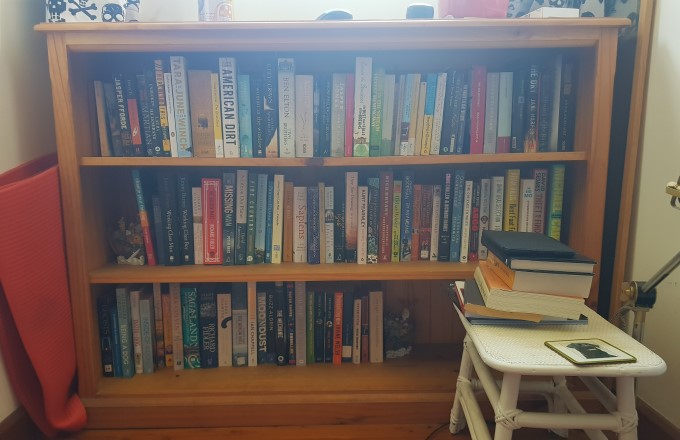 12+   Instead of a to-be-read pile, I have a bookcase of books beckoning me. I'm currently whittling down the "pile" by reading three books in three different formats — two of these won't help clear my bookcase. And all are nonfiction, which is unusual because I enjoy reading (and writing!) fiction.

The three formats are an audiobook, an ebook and a "traditional" paper-based book. In another blog post, "To Kindle, or not to Kindle?" (December 2020), I listed the responses to a question I posed to the ABC Book Club on "real books" versus ebooks.

In summary, Kindle, Kobo and tablet readers loved their devices for the ease with which they could adjust text size and read in bed at night without waking spouses. And carry a "bookcase" with them.

However, there was strong resistance to ebooks by readers who preferred traditional books. They liked to hold them, turn the pages and smell the paper. And they loved the cover artwork.

A smaller third group praised audiobooks for the ability to listen to books while performing other tasks. And as with ebooks, I've discovered the functionality and joy of audiobooks since my Kindle blog post.

And this brings me to the three books I'm currently reading!

Note: Click on a book cover to view it on Amazon (affiliate links). 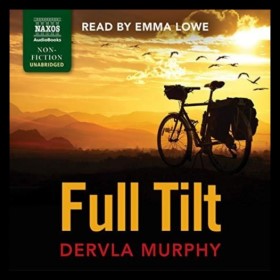 I've been a Dervla Murphy fan since reading an extract from her classic travel book, "Full Tilt - From Ireland to India with a bicycle", in a travellers' anthology in the 1980s. In his introduction to the piece, the anthology compiler, Eric Newby, described her as the "Intrepid Dervla Murphy". And after reading several of her books, I concur! Among my collection of "Dervlas", I have a secondhand 1967 Pan paperback edition of Full Tilt. But I've never got around to reading it (too many books in my TBR bookcase!). So I'm enjoying this audiobook, especially as Emma Lowe's lilting soft Irish narration sounds like it's Dervla reading her travel journal entries. Note: While researching this post, I learned Dervla had died in May 2022. She lived to ninety and is survived by her daughter and three granddaughters. So fittingly, it could be said, Dervla had a good journey. 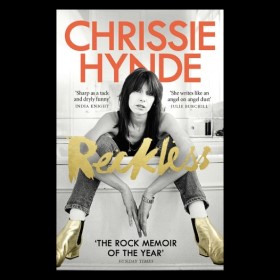 I've been watching the Sex Pistols biopic, reliving the music and times of my teenage years — though not the violence! And I wanted to know more about the principal characters, one of whom is Chrissie Hynde (although, possible spoiler alert, this is not explicitly revealed until later in the series). I've always liked Chrissie's music, in the Pretenders and as a solo artist. But I hadn't realised she hung out with the Pistols and other Punk rockers. Although after relistening to her early records while reading the book, I should have recognised her Punk credentials. Chrissie's is a no holds bar tale and a tough one. And she warns early on, "In the end, this story is a story of drug [and alcohol] abuse." But it's also compelling, and I've been reading the ebook version late into the night.

Journey Without Return by Raymond Maufrais (William Kimber and Co 1953) 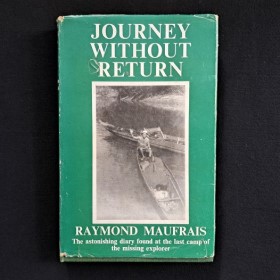 My son gave me this book for my birthday after seeing "Amazonie, In the footsteps of Raymond Maufrais" by Eliot Shonfeld at an adventure film festival. Raymond Maufrais was only twenty-three when he set off in 1950 from the French Guiana coast on a solo expedition to the remote and unexplored Tumuc-Humac Mountains on the border with Brazil. Critically under-resourced, Maufrais failed to reach his goal and disappeared without a trace. However, he had kept a daily journal, found in his last known location. And Maufrais's father published it as Journey Without Return to fund a futile ten-year search for his son.

Seventy years later, fellow French adventurer Shonfeld read Maufrais's book and decided to retrace his footsteps. In doing so, Shonfeld became the first man to complete the solo expedition to the Tumuc-Humac Mountains. But also nearly met the same fate as Maufrais.

On learning about the connection between Journey Without Return and the film, I searched for a book with an account of Shonfeld's adventure. But mistakenly ordered another book, "Into the Amazon - An Incredible Story of Survival in the Jungle" by John Harrison (Amazon affiliate link). An expedition also inspired by Maufrais that almost ended in disaster.

And for this blog post, Harrison's book provides a perfect callback because the foreword is by Dervla Murphy!

I was a traditionalist and read paper-based books when I posed the "real books" versus ebooks question on the ABC Book Club in 2020.

But, as I wrote in my "Kindle or Not?" blog post, the responses convinced me that "real books" come in various formats nowadays. And paraphrasing a fellow Book Clubber, "A book is a book, and regardless of the format."

Two years on, I'm proof of that with the three books I'm currently reading!

N.B. You might like to read my earlier Tall And True tribute to The Intrepid Dervla Murphy (March 2019).