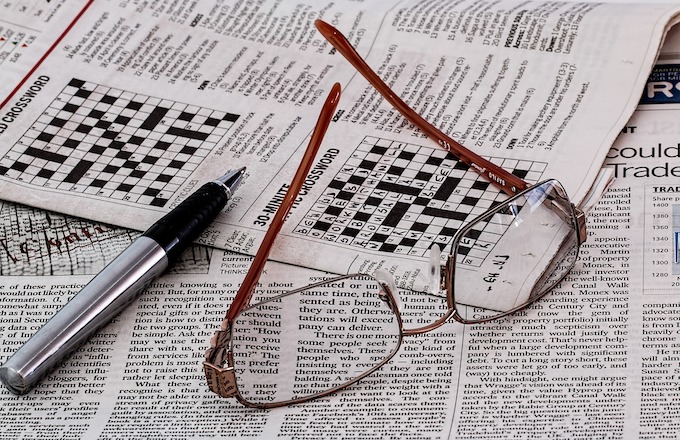 Loud voices in the street drown out the TV. I put down my crossword, walk to the front window and part the curtains. They're at it again, the neighbours across the way. I can see them pointing and shouting at each other under the pale street lights.

"Should I call the police?" I ask. But I don't answer because talking to yourself is a sign of madness or dementia. The neighbours retreat inside, a door slams and their voices become muffled. I let the curtains drop and walk to the kitchen.

My doctor told me to have chamomile tea before bed. "It could help with your blood pressure," she said. But that was a month ago, and I'm fond of brandy nightcaps. I reach under the sink for the near-empty bottle.

Everyone's grown jittery since the coronavirus outbreak. The neighbours argued before the lockdown, but now it's most nights and even during the day. Though, in fairness, they're not the only ones airing dirty linen in the street. I return to the front room with my brandy and pick up the crossword.

26-across, "Being alone, feeling unhappy or anxious (9)". ISOLATION.

Yes, I feel jittery and perhaps a little anxious, but I don't feel unhappy. Unlike the neighbours, I am on my own in isolation. I feel lonely some days, but there are no arguments.

Once upon a time, when the only virus we feared was the flu, the house was full of noise. But the years passed, and one by one, the children left until it was just the two of us.

Like the neighbours, we had our disagreements, especially in the beginning, over money and the children. But we grew old and comfortable together, to the point where we didn't feel the need for words. Sometimes we went days without talking. Funny, it's like that now, only there's no one with whom to share the silence.

The children phoned every couple of days after the government announced the lockdown. But they've got busy lives with the grandchildren, working from home and home-schooling. And then there was that business with the cruise ship. My son joked it was the one time he wished he'd missed the boat!

I haven't seen my grandchildren since the lockdown. My daughter phoned last week, I think. The truth is, I'm not sure. Even before this wretched virus, living alone, I lost track of the days and weeks.

Raised voices in the street again. I tut and turn up the TV. I wish the neighbours understood we need to get through this jittery time together. "Or on your own," I chide myself and sip my brandy before returning to the crossword.

With thanks to Steve Buissinne for the crossword image from Pixabay.

I wrote A Jittery Journey for the Australian Writers' Centre's monthly 500-word short story competition, #FuriousFiction, in June 2020. The FIRST and LAST WORDS of the story had to begin with a "J", and it had to include a GAME BEING PLAYED, and the phrase MISSED THE BOAT.

A crossword puzzle provided me with the perfect device for my first and last words and the game. And I used our jittery COVID-times to tell the journey of an older person living alone under lockdown, while the neighbours argue. As for missing the boat, who wouldn’t wish they’d missed boarding a “COVID Princess” cruise ship?

Once again, I didn't win or make the short or long lists for Furious Fiction. But I enjoyed the challenge of writing my short story in the 55-hour deadline. And I took great comfort in the knowledge June’s winning entry also featured a crossword.

You might like to read another of my short stories on Tall And True, Five Meet On Zoom, inspired by my boyhood love of reading Enid Blyton's Famous Five adventures.