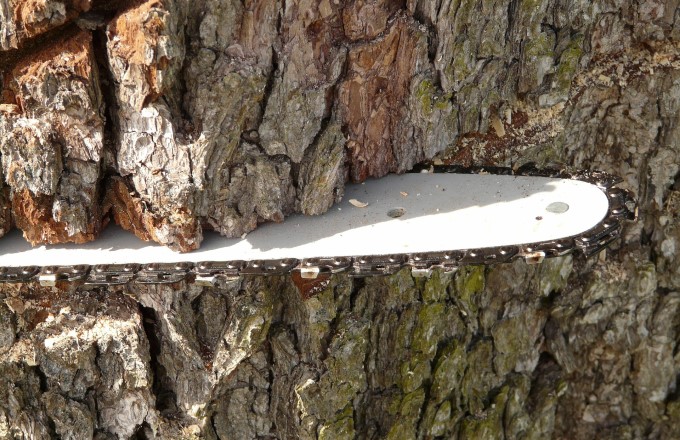 12+   The tree stood in front of a vacant block at the end of the street. It had thick, leafy branches and was easy to climb. It was Matty's special place. And then, one day after school, he saw a sign on the tree.

Matty couldn't read the big words and went home to find his sister. Jess was a school captain and made speeches at assemblies, so she'd know what the sign said.

"It's from the council," Jess told Matty when they returned to the tree. "It says there's been a development application."

Matty burst into tears. "Will they chop down the tree?" he sobbed.

Matty's mum searched the council's website for the development application. She looked up at Jess and shook her head.

"I'm sorry, Matty," his mum said, rubbing his back. "The builder has applied for permission to remove the tree."

"No!" Matty yelled, and he ran from the house and back down the street to climb the tree. He was still sitting in the branches when his dad came home from work.

"No!" Matty shouted back. "They're going to cut down the tree."

"I know, son," his dad sighed. "Mum and Jess told me. But it's only an application. The council may not approve it. Or they might ask the builder to change the plans."

"I can't promise anything, son," his dad admitted. "But we can contact the council. Now, come on, dinner's getting cold, and you've got school tomorrow."

Back home, over dinner, Jess told a dejected Matty she was starting a petition for the tree. "The kids at school will sign it," she said. "And we can ask the neighbours, too."

"And Dad and I will write to the council tomorrow," Matty's mum promised.

"And we can make a 'Please Save This Tree' poster tonight," Jess added.

Matty felt a little better. But he still had a bad dream overnight about a builder who danced around the tree with a chainsaw.

On their way to school the next morning, Matty and Jess taped their poster to the tree.

"What are you kids up to?" called a man wearing a hard hat from the vacant block.

"We're saving the tree," Matty told him. "A mean builder wants to chop it down."

Matty felt Jess elbow him. The man laughed. "Is that so?" he said. "And why is this tree so important?"

"All trees are important," Jess replied. "But this one's special because Matty loves climbing it."

"And Jess is starting a pe-tition for the tree," Matty chipped in excitedly. "And Mum and Dad are writing to the council."

"Oh, are they?" the man said and smiled. "Well, good luck, kids. Maybe the mean builder will listen to you?"

With thanks to Hans Braxmeier from Pixabay for sharing the image of the judge's gavel.

The Special Tree was my entry for the Australian Writers' Centre's December 2021 Furious Fiction. The brief for the 500-word short story was:

Like December 2020's brief, where the story had to include a GIFT of some kind, the temptation was to fashion a festive season scenario. However, as I did with last year's Furious Fiction entry, The Gift, I decided to write a short story that had nothing to do with Xmas or Xmas trees!

Instead, I drew on my experience as a boy for my protagonist and plot. A tract of undeveloped land surrounded my boyhood home. We called it the "bush", and within it stood tall trees that I loved climbing. But one day, bulldozers rolled in and cleared the trees, and builders followed. The bush that had seemed so vast to me as a boy became a row of boxy suburban houses.

I condensed my boyhood bush into a vacant block with a favourite climbing tree out the front. My young primary school-aged protagonist, Matty, finds a sign on the tree and asks his big sister to help him read it.

Back home, Matty's mother searches the council website for the development application and confirms the builder wants to remove the tree. Matty is distraught, but his family promise to contact the council and rally support to save the tree.

As a writing device, I simplified the third-person narrator's language because I wanted the story to be from Matty's point of view without making it first-person.

Does the "mean builder" remove the tree? I leave that for the reader to decide. But I hope Matty has more luck with his tree than I had with mine in the bush all those years ago.

N.B. You might like to read another of my kid friendly Furious Fictions, Five Meet On Zoom.

You may also like to listen to my narration of The Special Tree for the Tall And True Short Reads podcast.